Sofia surges to record growth in 2007 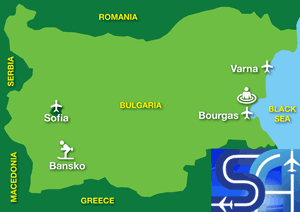 Sofia Airport, the main international airport serving Bulgaria, saw traffic numbers surge last year by an impressive 24% to over 2.7 million. This is more than double the number that used the airport in 2003. Traffic during the last four years has grown by at least 15% each year, but 2007 saw the airport achieve its highest ever growth helped by the belated opening of the impressive new second terminal in late December 2006, which neatly coincided with Bulgaria’s accession to the EU on 1 January 2007.

Although Sofia has a typical summer peak in August there is also a smaller peak in December and January thanks to a burgeoning ski market. This helps keep Sofia’s peak to off-peak ratio (August v February) to under 1.5.

With the opening of the new Terminal 2, Bulgaria Air (the successor to Balkan Airlines) and other legacy carriers moved to the new facilities, while the low-cost carriers have remained in the old building. Currently LCCs have about 19% of scheduled capacity, but this proportion is set to grow in 2008.

Bulgaria Air is the largest carrier at the airport and carried around 28% of the airport’s passengers in 2007. Its passenger numbers at the airport increased by 35% in 2007 to just over three-quarters of a million. This winter the airline operates scheduled services to 27 destinations, though only its domestic route to Varna (with 19 weekly flights), Brussels and Madrid are served at least daily. Its fleet consists entirely of 10 to 20-year-old 737-300s and 737-500s.

Three other flag carriers (from nearby Germany, Italy and Austria) are the next busiest airlines before the largest LCCs SkyEurope and Wizz. The latter will soon become the leading LCC at the airport as it starts six new routes in July and will also base an aircraft there. Ryanair is currently conspicuous by its absence, while easyJet only offers a daily London Gatwick service which began last November.

Despite Germany being the leading country market this winter (15.3% of seat capacity) neither Air Berlin nor TUIfly offer scheduled services to Sofia, though Germanwings does operate thrice-weekly to Cologne/Bonn. Italy is the next busiest market (13.1% of seat capacity) and is helped by MyAir operating to five airports (Bari, Bologna, Milan Bergamo, Rome Ciampino and Venice) though mostly at low frequency.

After Germany and Italy the biggest winter country markets are Austria, the UK, Greece, Russia and the Czech Republic. A total of 25 countries are served with direct scheduled services this winter including Libya, the Ukraine and the UAE with weekly flights operated by RAK Airways to Ras Al Khaimah.

The start of the winter season saw new routes started by easyJet (to London Gatwick), Rak Airways (to Ras Al Khaimah) and Wizz Air (to Dortmund), while MyAir started weekly services to Bari only last week. From the start of the summer season Swiss will operate daily to Zurich, while Bulgaria Air starts twice-weekly fights to Valencia from 15 March.