Spicejet was created as a ‘low-cost brand’ in 2005 by Royal Airways, which can trace its own origins back to a company called Modiluft which operated in the early 1990s. Starting with two 737-800s Spicejet has grown rapidly, especially in the last 12 months, to reach a fleet of 18 aircraft, 16 737-800s (189 seats) and two 737-900s (212 seats). Its latest quarterly reports suggest that the airline has carried around 3.5 million passengers in the last 12 months and though profitable during the second quarter of 2007, reported a loss in the third quarter.

According to the latest schedule data Spicejet has a 10% share of the Indian domestic market in terms of seat capacity and operates around 7% of all domestic flights.

During the second and third quarters of 2007 the airline carried 914,000 passengers and 858,000 respectively, an increase in both cases of 63% over passenger numbers in the previous year. The airline now serves a total of 18 destinations. Start dates for services to/from each airport are:

In 2007 three new airports were added, while already this year Bagdogra has been the latest addition to the list. At the end of March Spicejet will start flying to its 19th airport at Visakhapatnam (Vizag) which will be served twice daily from Hyderabad. Analysis of the existing network shows that Delhi is the busiest airport for Spicejet. 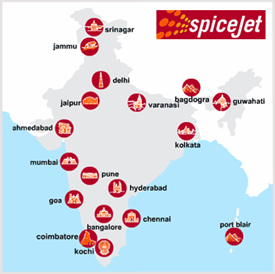 Apart from Delhi, four other airports have at least 10% of Spicejet’s operations. Delhi also has the most routes (14), followed by Bangalore, Chennai, Hyderabad and Mumbai (all with eight routes). Most routes are operated daily or double-daily, though Delhi to Hyderabad is served three times each day and Mumbai to Delhi is served four times daily.

Apart from keeping up its domestic growth with the addition of several new aircraft in 2008 the airline would like to start international operations as soon as possible, despite not yet having reached the five year operating threshold currently demanded by the government.

The airline has identified Bangkok, Dubai, Kuala Lumpur and Singapore as its first targets for international flights though these would likely be served from so-called ‘Tier II’ cities such as Ahmedabad, Pune and Coimbatore.