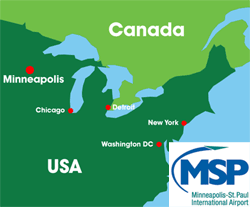 Minneapolis-St.Paul International Airport (MSP) was the 12th busiest airport in North America in 2007 with 35.2 million passengers, still below its all-time peak of 37.7 million in 2005. For Northwest it is one of its two major hubs alongside Detroit.

At the start of the summer 2008 season Northwest operates marginally more capacity at MSP, though it operates more flights from Detroit. Northwest’s five biggest bases are listed below ranked on capacity.

Northwest has 75% of traffic at MSP

Along with partner airlines Mesaba and Pinnacle (which operates flights under the Northwest Airlink brand) Northwest has consistently had around 75% of traffic at MSP in recent years.

Around 54% of passengers at MSP are connecting and according to an analysis undertaken in 2006 MSP has the third highest ratio of non-stop markets to population of all Metropolitan area airports in the US. With a population of ‘just’ 3.1 million and 142 markets served, the ratio of 45.8 is beaten only by Denver (54.6) and Atlanta (48.9).

The second largest non-Northwest affiliated airline at MSP is locally-based independent carrier Sun Country airlines which handled 1.525 million passengers. Neither Southwest nor jetBlue currently operates to MSP and AirTran (four routes) and Frontier (to Denver) hardly have a significant presence. As a result Northwest has a monopoly on almost two thirds of the flights that it operates and over 50% of all ASKs. On 32 routes it faces a single competitor, while on just seven routes does the airline have to contend with two competitors. These seven routes are Atlanta, Chicago O’Hare, Denver, Dallas/Fort Worth, Miami, Orlando and Phoenix.

On its 48-weekly Las Vegas flights it faces competition from Sun Country (11 weekly flights), US Airways (12 flights) and Champion Air (five flights). Flights to Europe are limited to Amsterdam (thrice daily) and London Heathrow (daily, having switched from London Gatwick) with Icelandair operating to Reykjavik.

Presumably fares are not included as a factor in the annual SkyTrax survey of airline passengers, who awarded MSP the award ‘Best Airport in North America’ in 2005.

Apart from finally being able to move its London service from Gatwick to Heathrow, Northwest is starting its third transatlantic route from MSP on 8 April when it begins daily services to Paris Orly with an A330-300 configured with 34 seats in World Business Class and 264 seats in economy.

In May and June Northwest’s partner Pinnacle will be launching new daily routes to regional airports at Greenville/Spartanburg, Fort Wayne, Lexington while also launching a new international service to Ottawa in nearby Canada. Meanwhile, fellow partner Mesaba will also start daily services to Iron Mountain (in Michigan) and Dubuque (in Iowa) using a Saab 340 from early June.

Looking further ahead it is hoped that Northwest may begin non-stop flights to Shanghai in 2009 when the airline receives the first of its 787s.