Last year China Southern became the first Chinese airline to transport over 50 million people which makes it one of the world’s top 10 airlines in terms of passengers flown. With a fleet of over 300 aircraft (a healthy balance between Airbus and Boeing models) the airline is the most recent addition to the global Skyteam alliance, having become its 11th full member on 15 November last year.

In 2005 China Southern airlines acquired the airline operations and related assets of China Northern Airlines and Xinjiang Airlines which explains the surge in passenger numbers that year. As a result of the rapid growth the airline reported a significant loss in 2005 before reporting a modest profit in 2006. 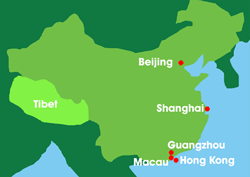 Demand peaks each year in August and passenger numbers overall in 2007 were up 15.6% versus 2006. In the first two months of this year traffic is again maintaining double-digit growth.

Guangzhou is one of five major airports serving the Pearl River Delta region on China’s southern coast, the others being Hong Kong, Macau, Shenzhen and Zhuhai. One in every six China Southern departures is from Guangzhou, which makes it almost twice as busy as any other airport in the airline’s network.

In the last year China Southern has started new international services to Ashgabat, Cebu, Hong Kong, Phuket, Seoul, Siem Reap, Tehran and Yangon. According to the airline’s website new services to Amsterdam from Guangzhou, Shanghai and Shenzhen will be ‘opening soon’. These will gain feed from Skyteam partner KLM’s extensive network at the airport.