Frontier in Denver: Caught between the Rockies and a hard place

Frontier’s recent decision to file for Chapter 11 bankruptcy protection highlights the problems of being a medium-sized airline with just a single major base, a feeling that several European flag-carriers can probably well relate to. 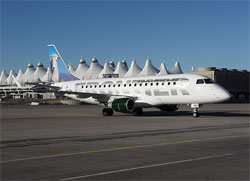 Apart from its own Airbus operations the airline also offers flights under code-share agreements with Republic Airlines, Great Lakes Airlines and Lynx Aviation. Republic operates Embraer 170s and Lynx flies a growing number of Q400s, with both airlines operating in Frontier colours. It is worth noting that although Frontier is recognised in the US as a low-cost airline its A319s are fitted with 15% fewer seats than easyJet aircraft of the same type (132 versus 156), suggesting that the airline feels that US customers require a higher level of seat comfort.

Is there a profitable market between United and Southwest?

An analysis of the airline’s network from Denver shows that Frontier currently operates to 59 destinations. On only 11 routes does the airline face no head-to-head competition, including two low-frequency routes to Mexico and its new Costa Rica route.

In terms of frequencies, capacity and ASKs less than 10% of Frontier’s Denver network is not subject to competition. On four of its busiest routes (which represent over 10% of its capacity) to Atlanta, Phoenix, Salt Lake City and Seattle the airline faces competition from three carriers. While the airline seemed to prosper when United was its only real competitor things have got considerably tougher since Southwest entered the market in 2006.

An analysis of the eight largest markets served by Frontier in terms of weekly departures shows that United competes in all of them (no surprise), but that Southwest is already present in six of them and will start five-times daily Los Angeles flights next month. No wonder things have got tough for Frontier.

In the next two months Frontier’s partner airlines Lynx and Republic are starting eight new routes to and from Denver using a mix of Q400s and Embraer 170s. Of the eight destinations four are in Colorado (Aspen, Colorado Springs, Durango and Grand Junction), two in Montana (Bozeman and Missoula), and one each in North Dakota (Fargo) and Wyoming (Jackson Hole). All of these routes will be served at least twice daily.

These types of route are less likely to attract the attention of the likes of Southwest and may represent the way forward as the airline restructures.