Iceland Express: Warsaw and Gatwick are only new routes in 2008

Iceland Express started low-cost flights on the 27 February 2003 with just two routes from Reykjavik (KEF) to Copenhagen and London Stansted. Flights were operated by Astraeus using a couple of 737-300s. It would be another two years before a third route, to Frankfurt Hahn, was started in May 2005. Then in summer 2006 things got really exciting when seven new routes were started followed by a further seven in 2007.

After starting with Astraeus and its 737s, Iceland Express has also used JetX (MD90s) and now Swiss-based Hello (also using MD90s) to provide the necessary capacity. The airline is currently owned by Northern Travel Holdings (NTH), which is also the owner of Copenhagen-based Sterling and Astraeus, the UK-based capacity provider, from whom a 757-200 is wet-leased during the peak summer period.

Many seasonal routes from Reykjavik 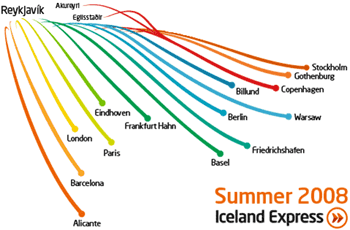 Copenhagen and London Stansted remain the only two destinations which are served at least daily and account for almost 50% of the airline’s total network capacity. The only other year-round destinations are Alicante, Barcelona and Berlin SXF.

Seasonal destinations from Reykjavik which operate between mid-May and mid-September, each served either twice or three-times weekly, are Basel, Billund, Eindhoven, Frankfurt Hahn, Friedrichshafen, Gothenburg, Paris CDG and Stockholm Arlanda. There are also seasonal flights to Copenhagen from Akureyri and Egilsstadir in Iceland.

First LCC to Luxembourg; now off to Warsaw

One of the airline’s more unusual claims to fame is that it appears to have been the first low-cost airline to attempt to serve Luxembourg. Twice weekly flights began on 28 September last year and ended on 9 November, suggesting that only around 12 return flights were ever made between the two airports. Luxembourg is not in the flying programme this summer and neither is Oslo which also began last summer. The only other route the airline has tried and axed was from Akureyri to London Stansted which operated briefly during late summer 2006. 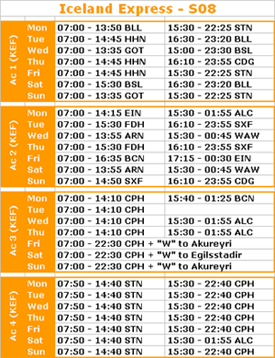 The only new city to receive Iceland Express flights in 2008 will be Warsaw, which will be served twice-weekly from 21 May. From mid-September the airline’s London services, previously operated exclusively to Stansted, will be split between Stansted and a new five-times weekly service to London Gatwick. British Airways, which started Gatwick services to Reykjavik in summer 2006, has pulled off the route this summer.

The airline remains coy about revealing network passenger numbers or load factors, but in both 2006 and 2007 Iceland Express carried around 92,000 passengers on the London Stansted route giving it a 22% share of the UK-Iceland market. The decision by BA to pull out of the market leaves just Iceland Express and Icelandair. The last UK airline to operate between the UK and Iceland was Go, BA’s low-cost subsidiary, which operated seasonally from London Stansted to Reykjavik during summer 2000 and 2001.

The peak summer period (June to August) schedule requires four aircraft to operate it. Analysis of the schedule reveals that each aircraft operates two return flights each day apart from one aircraft on a Tuesday afternoon. Three of the aircraft depart each morning at 07:00 and flights to Alicante, Barcelona, Eindhoven and Warsaw return to Reykjavik well after midnight.