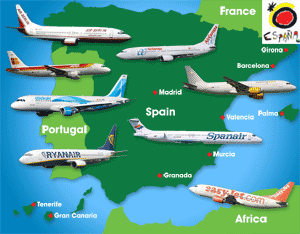 Spain’s airports have witnessed impressive traffic growth of between 7% and 10% for each of the last five years, but many industry pundits expect 2008 to be the year when growth finally slows down. Total airport traffic passed 200 million passengers in 2007 and at current growth rates Spain could overtake the UK as the biggest country in Europe for air travel by 2010.

Last year the UK’s airports handled 242.9 million passengers but growth was just 2.3% compared with 8.9% growth in Spain. The growth in air travel demand at Spain’s airports, especially since 2002, has been driven primarily by LCCs.

Traffic at Madrid Barajas and Barcelona El Prat airports accounted for 40% of Spain’s total airport traffic last year. Both grew above the national average thanks to recent infrastructure improvements which attracted both easyJet and Ryanair to set up bases in Madrid and the creation of Click Air in Barcelona.

Domestic traffic last year accounted for around 43% of Spanish airport passenger movements, compared to 41% in 2002. Analysis of current schedules shows that Iberia has just over one third of the domestic market with five other carriers each having at least a five percent share.

LCC leaders Ryanair (with just seven routes) and easyJet (with just four routes from Madrid) only have around 2% of the domestic market between them. If Iberia was successful in acquiring up-for-sale Spanair (something Star Alliance partner Lufthansa is apparently trying to persuade current owner SAS to prevent from happening) it would have a dominant position in the domestic market. Iberia also has a 20% share in Click Air which may (or may not) be set to merge with Vueling. That would give Iberia some control over 70% of the domestic market, a figure beaten only by Air France in its home market.

With the launch of high-speed rail services between Madrid and Barcelona (which is expected to reduce air travel between the two cities by around one-third) domestic traffic growth may fail to reach the 9% level reached last year.

Traffic between Spain and Italy more than doubled in the same period while demand to Portugal also virtually doubled. Conversely, traffic to Sweden grew by less than 10%.

In 2007 the three leading airlines in terms of passengers passing through Spanish airports were all locally-based airlines. This is not surprising as domestic passengers will obviously be counted twice, once at each end of the route. Although Iberia’s traffic was down this was more than compensated for by the rapid growth of Click Air.

Apart from the rapid rise of Click Air other LCCs also saw their passenger numbers in the Spanish market increase significantly. Vueling reported a 70% increase in demand, Ryanair 51% and easyJet 25%.

With Vueling and Click Air both scaling back their growth plans for 2008 it may be left to Ryanair (which recently opened bases in Alicante and Valencia, and will add a new base in Reus later this year) to maintain the onward march of the LCC business model.