In the six-month period between April and September 2007, Emirates saw passenger numbers climb 23% to 10.3 million. This suggests that in the full calendar year, the airline will have transported around 20 million passengers, the vast majority of whom will have either passed through Dubai, or started or ended their journey there. Traffic has virtually doubled in the last four years as the fleet has grown to over 100 long-haul aircraft, but load factors have consistently remained in the 75% to 80% range and, more significantly, the airline has reported healthy profits.

Coming to America – north and south

With deliveries of the ultra long-haul Boeing 777-200LR (configured with 266 seats in a three-class layout), non-stop flights to most of North America are now possible. In the last year, the airline has announced new routes to Houston (which started in December) as well as Los Angeles and San Francisco, both of which will start operating later this year.

Since last July, the airline has either started or announced 11 new routes.

Apart from three new US routes (to complement the existing double-daily New York JFK service), Emirates also started operating to Toronto and Sao Paulo last year to broaden its presence in the Americas. 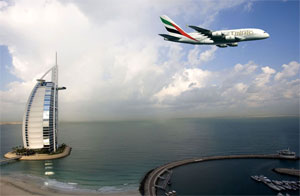 As a global hub – linking the Americas and Europe with the Middle East, Asia and Africa – it helps that Dubai airport operates throughout the day and night. A closer look at the airline’s schedules reveals the main peaks in terms of arriving and departing flights.

There are two major waves of inbound flights. One is between 23:00 and 01:15 and the other is between 05:00 and 07:00, while the corresponding outbound waves occur between 02:00 and 03:45, and 07:00 and 10:15. Since Dubai is unconstrained in terms of opening hours, many of the flight timings are influenced by curfews and flight restrictions at the destination airport.

Around one quarter of all flights and seats operated by Emirates from Dubai are to just two countries – the UK and India. Six destinations are served in the UK: both major London airports, Manchester, Birmingham, Glasgow and most recently, Newcastle.

A total of nine destinations are currently served in India, with a 10th (Calicut) due to start in July. Emirates serves just four destinations in Germany (Dűsseldorf, Frankfurt, Hamburg and Munich) and would like to serve more. However, Lufthansa has been exerting pressure on the German regulatory authorities to try and prevent the airline from being allowed access to additional markets, such as Berlin or Stuttgart.

China and South Africa both appear in the top six country markets and with the Chinese government investing heavily in various African infrastructure projects, Emirates offers ideal connections between these two regions serving Beijing and Shanghai in China and Johannesburg and Cape Town in South Africa, plus daily flights to Kenya, Nigeria, Ethiopia, Sudan and Tanzania.