According to data published on the official website dedicated to explaining and promoting the benefits of a merger between Delta and Northwest and based on existing traffic data, Florida will be the number one origin and destination (O&D) market for the combined airline.

Despite the two carriers operating only around 400 peak day daily departures, these generate around 22 million annual passengers travelling to or from (as opposed to via) airports in Florida.

Georgia, which is of course home to Delta’s massive Atlanta base, comes second with around 16 million O&D passengers, highlighting just how many of Delta’s Atlanta customers are merely connecting through the airport rather than starting or ending their journeys there.

The states of California, New York, Michigan and Minnesota will all generate more than 10 million annual O&D passengers. The top five states for each airline in terms of current daily peak day departures are shown below. 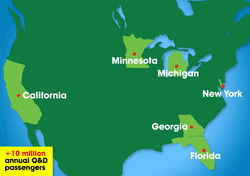 Delta is keen to point out that according to its own analysis, the new merged airline will serve over 140 US community airports (those defined by the FAA as having less than 500,000 annual boardings in 2006) whereas its nearest competitor, United, serves only 78, US Airways 74, American 54 and Continental 53.

Possible savings from network synergies of between $700 million and $800 million have been estimated through a combination of fleet optimisation and an expanded schedule, which is expected to improve the revenue mix.

Both Delta and Northwest were recently able to shift their London flights from Gatwick to Heathrow and Northwest has also begun new services between Portland and Amsterdam, and Minneapolis/St. Paul and Paris CDG (see below). A new Detroit to London Heathrow service begins in May, while a Seattle service to Heathrow begins in June. Meanwhile Delta will inaugurate direct daily flights between its Salt Lake City hub and Paris Orly, and Atlanta and Stockholm in early June.