The launch of seven new routes by Ryanair last October and November (four to the UK, two to Germany and one to Ireland) helped stimulate Budapest’s traffic growth into double figures in November and contributed to the airport being able to report 4% growth in traffic to 8.6 million passengers in 2007. Low-cost carriers accounted for around 26% of total passengers last year, the same as the year before.

The seasonality profile of Budapest has been very stable in recent years with demand peaking in August and being at its lowest in February. The peak to off-peak ratio between these two months has consistently been around two. 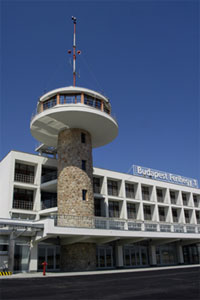 Traffic in the first three months of 2008 is up 7%, suggesting that annual traffic should pass the nine million mark this year, confirming Budapest as the third busiest airport in the new EU member states, behind Prague (12.4 million) and Warsaw (9.3 million).

After a surge in new low-cost services following the country’s entry into the European Union in May 2004, troubled national carrier Malev has started regaining market share in the last two years. Malev’s share of Budapest’s traffic fell from 49% in 2002 to just 34% in 2005, despite its own traffic growing by 25% during that time. However, its market share has now started to recover – increasing to almost 37% last year.

While Malev remains the leading carrier in Budapest it is facing intense competition from some of Europe’s most dynamic LCCs. This summer’s schedule data reveals that LCCs have around a 31% share of scheduled capacity, which probably equates to a 35% share of scheduled passengers due to their higher average load factors. Malev’s average load factor in 2007 was just under 70% according to AEA statistics. The leading airlines in Budapest this summer are:

According to www.airportcharges.com, costs at Budapest’s ‘low-cost’ terminal are comparable with those at Warsaw’s low-cost terminal and around 30% lower than at Bratislava or Prague airport for a typical low-cost operation. As a result, the airport attracts a wide range of European LCCs – including Aer Lingus, Air Berlin, Click Air, Germanwings, jet2.com, Norwegian and Sterling – though some of them prefer to use the more expensive Terminal 2.

At the end of the summer 2007 season, SkyEurope withdrew all services from the airport having set up its first foreign base in Budapest in November 2003. During its four years at the airport the Bratislava-based LCC had operated to 24 destinations, but complained that demand was too seasonal to make operations profitable. However, this summer the airline is re-launching a twice weekly service to Trieste in Northern Italy.

Despite having its HQ close to Budapest airport, Wizz Air operates just 10 routes from the airport at the beginning of the summer season with only one route (London Luton) served at least daily. During the summer, the number of destinations doubles as a range of low-frequency summer sun routes, such as Heraklion, Palma, Rhodes and Varna are added. Seasonal flights operated last summer to Split and Thessaloniki have not been included in this summer’s schedule. New routes to Oslo Torp and Venice Treviso begin in July, both of which will be operated thrice weekly. Other new routes started in 2008 so far include Norwegian to Oslo Rygge (twice weekly) and Aer Lingus to Belfast International (thrice weekly).

Under its new Russian owners, Malev has been building on its recent membership of the oneworld alliance. Services to New York and Toronto, which the airline axed over the unprofitable winter period, re-start in May using the airline’s 767. Flights to Munich have been stopped, which will no doubt delight Lufthansa, while the route to Dubrovnik is another victim of the new management’s approach to network profitability. Routes to Cluj Napoca and Milan, previously operated by partner airlines Carpatair and Alitalia, will now be operated by Malev aircraft.

This summer, Germany and the UK are once again the leading country markets to/from Budapest. Germany with around 19% of all flights is served by Air Berlin, easyJet, Germanwings, Lufthansa, Malev and Ryanair. A total of 12 German airports are connected to Budapest with direct services this summer. According to data from destatis, traffic to and from German airports declined almost 4% last year to 1.46 million.

The UK market accounts for around 9% of flights, 13% of capacity and an estimated 15% of passengers. Flights to nine different UK airports are provided by a mix of Aer Lingus, British Airways, easyJet, jet2.com, Malev, Ryanair and Wizz Air. easyJet faces direct competition on both its routes to London Gatwick (from Malev) and London Luton (from Wizz Air). Astonishingly, Europe’s busiest LCC airport at London Stansted is not currently served, though Sky Europe operated the route between November 2003 and June 2006.