Cyprus: New terminals at both major airports will hope to attract additional services 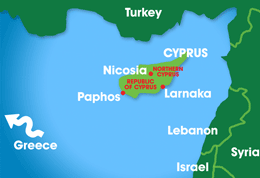 Despite joining the EU in May 2004 Cyprus has not seen the same level of air traffic development as other countries that joined at the same time. Traffic at the two commercial airports of Larnaca (LCA) and Paphos (PFO) grew by a combined 3.9% last year and passed seven million for the first, but passenger numbers were at similar levels as long ago as 2001. Larnaca’s 7.2% growth in 2007 was offset by a 4.7% fall in traffic at Paphos.

Although Cyprus has a population of just 800,000 people it is primarily a receiver of air travel rather than a generator. This is reflected in the extreme seasonality of demand which is generated by in-bound tourism, traditionally primarily from the UK.

Both airports have a monthly peak to off-peak ratio of around 3.8 with August the busiest month for both airports. Traffic at Larnaca has got off to a strong start in 2008 though traffic levels at Paphos are still below 2006 levels, though up on 2007.

Given the country’s chequered history it comes as no surprise that the leading routes from Larnaca are destinations in Greece and the UK.

Big growth areas for Cyprus are flights from Russia, new EU member states such as Bulgaria and Romania, and Scandinavia. The majority of Russian traffic is operated on a charter basis due to the nature of the existing bilateral.

Traffic at Paphos airport is dominated by UK charter/scheduled airlines with Thomsonfly the leader followed by GB Airways and First Choice. In 2007 the top nine destinations from Paphos were all to UK airports (led by Gatwick and Manchester), the highest-ranked non-UK destination being Brussels.

Last year Cyprus Airways (operating a fleet of 11 Airbus aircraft) was the leading carrier at Larnaca airport with just over 1.6 million passengers, representing 31% of all traffic. According to AEA data Cyprus Airways grew its traffic 6% in 2007 while load factors climbed two points to 72%. The airport also reported a modest profit last year. When combined with traffic carried by Eurocypria (which started life as the charter arm of Cyprus Airlines), Olympic and Aegean, ‘local’ airlines represented half of all traffic at LCA. XL Airways, British Airways and First Choice were the next biggest carriers in terms of passenger volumes.

Monarch has added new connections from both London Gatwick and Manchester to complement its existing London Luton service. Lufthansa is adding a new regular seasonal service from Munich (thrice weekly) while Air One will operate a new twice-weekly service from Rome FCO during the peak season.