Wizz Air not chicken in entering Kiev market with one aircraft

By creating a local subsidiary, Wizz Air Ukraine, Budapest-based LCC Wizz Air has ventured into hitherto unknown territory for European LCCs. From Friday 11 July the airline will offer a total of seven domestic routes from its new base at Kiev Boryspil (KBP) airport. Five destinations will be served direct from Kiev while Simferopol will also be connected to Lviv and Kharkov. Thanks to the relatively short flight times and high utilisation of the aircraft all routes will be performed by a single A320.

The aircraft departs KBP at 06:00 on every day of the week and returns just before midnight. Each day the aircraft is scheduled to fly 10 sectors which does not allow much room for technical problems.

Competition on the Kiev routes will be provided by:

The two other routes from Simferopol are not currently served by any airline. Last year Kiev’s Boryspil airport handled over 5.5 million passengers on a mix of domestic and international flights, with international traffic responsible for around 80% of passengers. Presumably Wizz Air will hope to base several aircraft in Ukraine in due course to gain economies of scale. 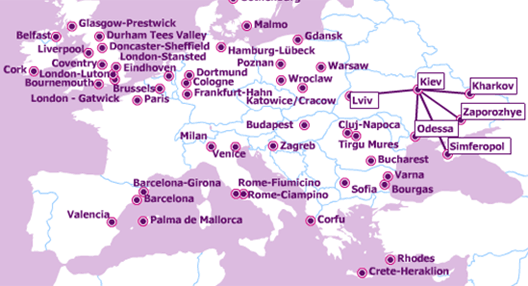