The skies are littered with airlines that contain the word ‘blue’ (jetBlue, Blue1, Blue Air and Blue Panorama spring to mind), but one of the less well-known globally is airblue, Pakistan’s largest independent airline which began operating in 2004. In fiscal year 2006-07 the airline carried over 1.4 million passengers on domestic flights in Pakistan compared with PIA’s five million and Shaheen Air’s 356,000. 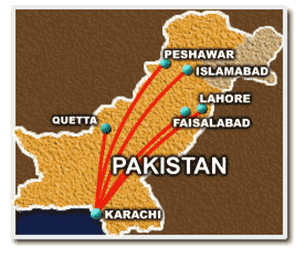 One aircraft is based in Dubai and flies to Lahore (daily), Islamabad (four times weekly) and Peshawar (three times weekly). Finally, one of the A321s is based in Islamabad to operate the daily service to Manchester. Due to the sector length the aircraft is required to make a ‘tech stop’ in Ankara. The airline would like to serve London Gatwick but is currently prevented from doing so by the bilateral agreement between Pakistan and the UK which limits each country to just one carrier in the London market.

In the last year airblue carried 252,000 passengers on international flights compared with PIA’s 3.5 million and 200,000 on Shaheen Air International. International traffic at Pakistan’s airports in 2006-07 was up just 1.3% to 7.2 million. Emirates and Saudi Arabian Airlines were the busiest foreign carriers.

The airline has a total of 14 A320s on order, the first of which are due for delivery in 2009. The aircraft will be configured with 157 seats in two classes. According to the airline, possible new routes for these aircraft include Abu Dhabi, Bangkok, Kuwait, Malaysia and Singapore.

A decision regarding a long-haul aircraft has yet to be made. Either the A350 or 787 would enable the airline to start non-stop services to Europe where it sees considerable potential for growth. Operating an A321 with a tech-stop is not ideal but seems to be working for now. Apart from the UK, airblue sees considerable potential for routes to Scandinavia, particularly Copenhagen and Oslo which both have a significant number of Pakistani immigrants.