Just over a month ago American Airlines was forecasting a capacity cutback of less than 5% in its domestic network for the last quarter of 2008, but the recent oil price rises have resulted in the airline now predicting an 11-12% reduction in its mainline domestic flying coupled with a 10% reduction in its regional domestic capacity. How many routes will be axed and how many will see significant capacity reductions has not yet been made clear. International capacity, which had been projected to grow at around 3% in the last quarter of 2008, is now forecast to remain unchanged.

Between 75 and 85 older and less fuel efficient aircraft (lots of MD80s) will be retired and there will be major job losses. Maybe not surprisingly, the airline’s share price fell 24% on Wednesday after these announcements were made at its annual meeting of stockholders.

In 2007, the number of passengers boarded remained virtually unchanged at 98.2 million. Annual revenue passenger miles (RPMs) fell 0.7%, while available seat miles (ASMs) fell 2.3% as systemwide load factor increased 1.4 points to a healthy 81.5%. The spike in February 2008 is explained by the extra ‘leap’ day this year. Passenger numbers in the first four months of 2008 are down almost 3%, though systemwide load factor is up 0.3 points to 79.4%.

American serves twice as many US airports as Southwest 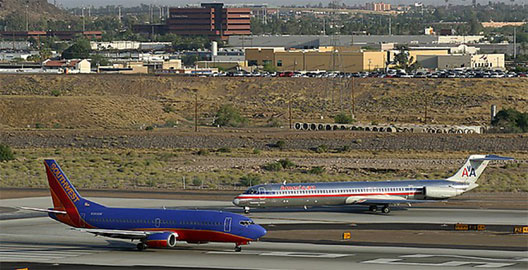 According to OAG schedule data for May 2008, American (mainline and regional combined) serves 149 airports across the US, more than twice as many as Southwest.

The airline’s biggest US bases remain Dallas/Fort Worth, Chicago O’Hare and Miami. Every airport served by American has at least two daily departures with the exception of Sarasota/Brandenton in Florida which has just a single daily service to Miami. On average each airport served by American offers just over six destinations and each route has an average frequency of around 26 weekly flights.

Plenty of new routes still being started in 2008

Despite the apparent stagnation in capacity and demand American and its affiliates have been busy starting and planning a number of new routes for 2008.

Much of the new route activity is focused at the major hubs with Europe and the Caribbean proving fertile ground for new destinations.