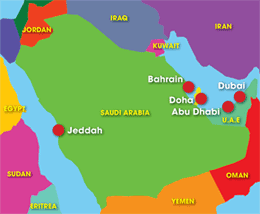 In the battle for connecting traffic in the Middle East one carrier seems to have been rather forgotten in recent times. While Emirates (Dubai), Etihad (Abu Dhabi) and Qatar Airways (Doha) have been ordering new aircraft by the dozen, Bahrain-based Gulf Air has been reasonably modest with its expansion plans. It has not been helped by the fact that having originally been set up as the ‘national’ airline of the Gulf States several of its founding members have gone off to develop their own airlines, leaving just Bahrain and Oman as joint owners. Last year Oman announced it too was withdrawing from the airline to focus on its own carrier Oman Air.

This will just leave Bahrain which is an island in the Persian Gulf with a population of around one million people. It covers just 665 square kilometres and is connected to Saudi Arabia by a causeway.

Handling over seven million passengers in 2007, Bahrain International Airport is ranked seventh among Middle Eastern airports and is similar in size to Abu Dhabi.

After growth of just 25% between 1998 and 2003 traffic has surged ahead 70% in the last four years and a total of 32 airlines now offer scheduled services at the airport. According to 2006 data from the airport just under half of all traffic is connecting between flights.

Traffic has picked up noticeably since last July when Gulf Air revealed its new network strategy. The emergence of a new private airline, Bahrain Air, which began operating in February has helped the airport achieve 25% growth in the first four months of 2008.

Gulf Air still dominant with more than half of all traffic

With its fleet of around 30 aircraft Gulf Air remains by far the biggest carrier at the airport offering flights to 39 destinations in Africa, Asia and Europe as well as within the Middle East. Apart from London, Paris and Frankfurt, Gulf Air also operates European flights to Greece and Cyprus.

The leading country markets are mostly those relatively close to Bahrain. Abu Dhabi, Dubai and Riyadh are all less than 500 kilometres away, while Doha is less than 150 kilometres from Bahrain.

The UK is the leading European country market and annual traffic in this market has grown from under 300,000 in 2003 to 371,000 in 2007. There are currently no direct services to either North or South America, South Africa or Australia. Gulf Air will soon be launching its first flights to China with the start of Beijing services next month.

A new private airline began services from Bahrain in February. Bahrain Air operates a growing fleet of A320s and currently serves Alexandria, Amman, Beirut, Damascus, Doha, Dubai and Mashad with further new routes to Kochi, Jeddah and Aleppo beginning in a few weeks. Routes to Abu Dhabi, Khartoum, Kuwait and Sanaa, which were announced at various times, do not yet have a known start date. The airline describes itself as a ‘Premium Low Priced’ airline with two classes of service, Premium and Economy. Each A320 is configured with 12 seats in Premium and 150 in Economy.

Bahrain may be tiny compared to some of its more illustrious neighbours but it can claim to have been the first Middle Eastern state to host a Formula 1 Grand Prix (which Gulf Air sponsors) and the soon to be completed Bahrain World Trade Center in Manama is unusual in being partly-powered by wind turbines that sit on connections between the two 50-storey towers.