With its fleet of 66 aircraft, a mix of 30 Western Airbus and Boeings as well as 36 Soviet-built Ilyushins and Tupolevs, S7 Airlines (formerly Sibir/Siberia Airlines) is Russia’s largest domestic airline. In the last few years the airline has placed orders for 25 A320s, 10 737-800s and 15 787s with delivery of the latter scheduled to begin in 2014.

Passenger numbers have grown by 16% in each of the last two years and annual demand has trebled from 1.9 million passengers in 2001 to 5.7 million in 2007, when average load factors also reached an all-time high of 80.9%.

Domestic traffic grew by 22% last year while international passenger numbers increased by 8%. Around 63% of the airline’s passengers are on domestic flights. In 2007 the airline continued to expand its network with 25 new routes added, including six to new international destinations. Regular flights began from Moscow to Ashgabat, Vladivostok, Innsbruck, Chisinau, Nadym, St. Petersburg, Semipalatisnk, Ufa and Khabarovsk, as well as Bratsk (via Irkutsk) and Chita (via Novosibirsk). 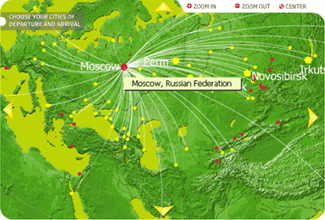 In the first four months of 2008 the airline has achieved growth of almost 38% while improving on load factors achieved the previous year. Although the airline has relatively few services to Western Europe it did recently start a new route from its Moscow Domodedovo (DME) base to Dublin. DME is by far the airline’s biggest hub and S7 serves 54 destinations from the airport. These include European destinations such as Frankfurt (daily) and Dűsseldorf, Hannover and Munich (all served weekly) as well as Tenerife (weekly) and Dublin.

The airline’s second biggest base is in Novosibirsk from where the airline operates to 18 destinations with 65 weekly departures. Beijing is served four times weekly while Dubai is served weekly.