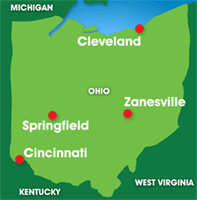 Cincinnati/Northern Kentucky International Airport is Delta’s second biggest hub after Atlanta and along with its regional partner Comair it accounts for a massive 87% of all scheduled seat capacity at the airport. Although all the other major US legacy carriers have a presence at the airport none operates more than four routes and these are all to their own hubs. In contrast, Delta and Comair serve over 100 domestic destinations, Montreal and Toronto in Canada, as well as Amsterdam, Frankfurt, London and Paris in Europe.

Highest fares in US

As a consequence of this market domination, and the fact that Delta’s aircraft at the airport have an average of just 70 seats, Cincinnati’s air fares are consistently the highest in the US according to the DOT’s Office of Aviation Analysis. This week’s farewatch looks at Cincinnati fares since 2004 in more detail. After Delta entered chapter 11, the number of routes and frequencies fell and passenger numbers at the airport in 2007 were 30% below the peak figures from 2005.

However, attempts over the years by various smaller LCCs to gain a foothold in the market have failed for a variety of reasons including Delta’s determination to defend its dominant position at the airport. Airport charges are below the national average and with three independent parallel runways capacity is not an issue. 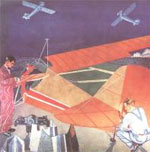 The three letter code for the airport, CVG, stands for Covington the nearest community when the airport was built in 1947 and not ‘Cincinnati Very Good’, a slogan attributed to Neil Armstrong when he was an airport Board Member during the 1970s. The airport is home to 14 stunning art deco murals which were moved to the airport in 1974 from their original home at the downtown Union Terminal railway station, itself an art deco marvel that is now a major museum complex and is this year celebrating its 75th anniversary.