Lufthansa leverages dominant position at Frankfurt; US routes account for 30% of ASKs

With over 60% of all movements at Frankfurt (FRA) airport, Lufthansa enjoys a dominant position at its main hub airport. Offering a total of 153 scheduled destinations to 67 countries ranging from Stuttgart (just 157 kilometres away) to Buenos Aires (slightly further at 11,498 kilometres) the airline has exploited the airport’s geographic location to create an excellent hub where domestic and short-haul routes help feed an extensive long-haul network.

The next largest airline at FRA, Condor, is primarily a charter airline that offers an impressive range of low-frequency leisure routes that pose little threat to Lufthansa, though that may change if Air Berlin is successful in acquiring control of the company, an issue that the German competition authorities seem to be rather dragging their heels over.

The next two biggest airlines are United and SAS, both fellow members of the Star Alliance, while TUIfly, like Condor, offers primarily low-frequency flights to Mediterranean destinations. Even Air Berlin’s position is deceptive as eight of the 11 destinations it offers are weekly Mediterranean flights, leaving just Alicante, Berlin Tegel and Palma served at least daily.

LCCs have a minimal presence at the airport with only Aer Lingus (to Dublin), Niki (to Vienna) and clickair (to Barcelona) offering a low-fare alternative.

Monopoly on 45% of flights 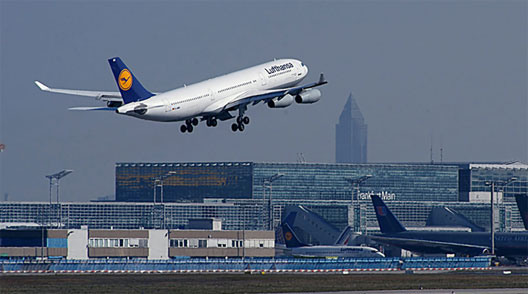 As a result Lufthansa has the luxury of being the only airline on over 45% of the flights that it operates. On only 6% of flights (11 routes) does it face competition from two other airlines. Five of these routes are long-haul (Singapore, Shanghai, Seoul, Calgary and Chicago) while the remainder are in Europe (Athens, Faro, Madrid, Moscow DME, Palma and Vienna).

Lufthansa is the only carrier on 13 domestic routes from Frankfurt, including Hamburg (75 weekly departures), Munich (73), Dűsseldorf (51), Dresden (42) and Stuttgart (41). It also has a monopoly on six Italian routes (Bologna, Florence, Milan Malpensa, Turin, Venice and Verona) and four French routes (Bordeaux, Marseille, Nice and Toulouse).

Importance of US market

Lufthansa is also strong on US routes where it faces no direct competition on routes to Boston, Denver, Houston, Miami, Orlando, Portland and Seattle. In total it offers direct flights to 17 US airports all of which (except Orlando) are served at least daily. The importance of the US market can be measured by the fact that over 30% of the airline ASKs (Available Seat Kilometres) at Frankfurt are allocated to US routes. The next biggest markets in terms of ASKs are India (7.5% of ASKs with six destinations served), China (6.3% with four destinations served) and Japan (5.4% with three destinations served). Domestic routes may represent over 20% of all Lufthansa’s flights at the airport, but these account for only just over 2% of the airline’s ASKs at the airport.

So far in 2008 Lufthansa has begun operating new routes from Frankfurt to Bergen, Billund, Bristol, Calgary, Gdansk, Krakow, Luanda, Malabo, Nanjing, Seattle/Tacoma and Valencia, using a combination of its own aircraft and those of its partners such as Cirrus Airlines, Lufthansa CityLine and Eurowings.