With almost 90% of flights at Houston’s George Bush Intercontinental airport (IAH) and offering flights to 178 destinations it is safe to say that Continental is the dominant airline at the airport. It is also the airline’s biggest base (and third largest of any US airline after Delta at Atlanta and American at DFW) as it offers 40% more seats from the airport than at its second largest base at Newark. With a total of almost 43 million passengers in 2007 IAH ranks 8th among US airports. 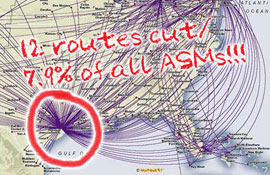 Continental offers an impressive 115 domestic routes from IAH which represents around 80% of its capacity at IAH. It also serves 31 routes to Mexico (accounting for 8% of capacity), which the airport claims is more than any other airport in the US. In addition it serves a further 25 countries including three in Europe (France, Netherlands and UK) and several in Central and South America. It was recently able to finally gain access to London Heathrow and now operates twice daily on the route as well as maintaining a daily service to London Gatwick.

While Continental faces no low-cost competition at IAH, Southwest does have a major base at William P Hobby Airport (HOU) from where it serves 29 domestic destinations. Southwest competes indirectly with Continental on six of its eight busiest routes in Houston.

However, as part of its plans to reduce mainline system capacity by 7% in this year’s final quarter Continental recently announced that it would be terminating services on a number of routes from IAH. Their current weekly frequencies and capacities are shown below:

Capacity on these dropped routes accounts for around 2.2% of Continental’s existing capacity at IAH. When combined with frequency and capacity reductions on other services the airline anticipates that its Houston base will incur a reduction of 7.9% in ASMs (available seat-miles) during the fourth quarter of 2008.

The highest profile casualty is the four times daily service to Washington Dulles where the airline competes with United. Continental will continue to serve Washington National from IAH where it faces no competition. The biggest capacity reduction is on the dropped Oakland route which is currently served by Southwest from Houston Hobby, again resonating the anna.aero theory: one airline’s service reduction is another carrier’s opportunity.