It has taken InterSky over six years to reach the milestone of carrying its 750,000th passenger but on 11 June one lucky lady flying from Friedrichshafen to Paris became that person. Although InterSky has its HQ in Bregenz (Austria), its operational base is at Bodensee-Airport Friedrichshafen (FDH) near Lake Constance in Southern Germany. 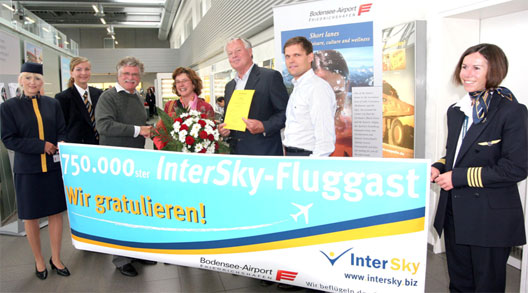 Four new destinations (including Paris) in 2008 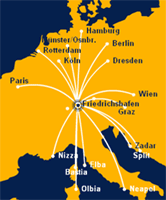 With the acquisition of a fourth 50-seat Bombardier Dash8-300 the airline is operating to 15 destinations this summer from its base at FDH.

Bastia, Munster/Osnabruck, Paris and Split are new destinations this summer while Graz, Hamburg and Vienna have seen frequencies increase. A weekly (Saturday) Rotterdam service operated from 1 December 2007 until the end of March 2008. In 2007 the airline carried 180,000 passengers (+9.1%) but expects to carry around 220,000 this year.

Sharing a terminal with Ryanair

In 2007 traffic at FDH airport was around 660,000 passengers and according to this summer’s schedule data Intersky is by far the biggest carrier at the airport with around 48% of scheduled seat capacity. Ryanair, which operates only two routes to Dublin (twice per week) and London Stansted (daily), is second with 23%.
However, because it uses 189-seat 737-800s its frequency share at the airport is just 7%. Lufthansa operates three daily flights to Frankfurt while Hamburg International operates weekly flights to a variety of Mediterranean destinations. Finally, Iceland Express operates an ambitious twice weekly service to Reykjavik.

InterSky is sometimes referred to as a low-cost carrier though it is hard to understand why. Its cheapest one-way economy fares are €69 (including all taxes) and operating a small fleet of 50-seat turboprops is hardly compatible with low-cost operations. A quick check by anna.aero reveals that taxes alone for a return trip between Friedrichshafen and Berlin Tempelhof come to over €180. However, the airline does kindly break this down into 22 separate taxes.