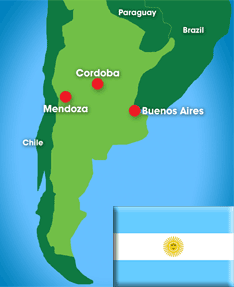 Last year passenger traffic at Argentina’s 32 commercial airports (operated by Aeropuertos Argentina 2000) increased by 6.7% to just over 18 million passengers. Since 2002 traffic has risen almost 40% as the economy has gone through a period of relatively stable growth. However, traffic figures have not yet returned to the heady days of the late 90s when over 20 million passengers moved through the country’s airports. Argentina endured a major economic crisis in the early part of this decade and domestic traffic is still well down. Growth has come primarily from international services at Buenos Aires Ezeiza (EZE) airport.

Aerolineas Argentinas (and its partner Austral) has 69% of domestic seats and 65% of flights followed by LAN Argentina with 23.1% of seats, Lineas Aereas Del Estado (also known as LADE, a scheduled airline that is operated by the military) has 5.4% of seats but 15% of frequency.

Buenos Aires AEP has 45% of domestic seat capacity serving as a hub to all other destinations. The top five routes are to Cordoba (88 weekly flights), Mendoza (66), San Carlos di Bariloche (47), Salta (41) and Iguazu (39). On all of these core trunk routes Aerolineas Argentina competes directly with LAN Argentina, part of the regional LAN airline family based in Chile.

Around 89% of all international passengers pass through Buenos Aires EZE airport. The leading country markets are near neighbours Brazil and Chile, while the USA and Spain rank third and fourth. The Brazilian market is dominated by Brazilian carriers such as GOL, TAM and Varig.

A total of seven US destinations are served (Atlanta, Dallas/Fort Worth, Washington Dulles, Houston Intercontinental, New York JFK, Miami and Chicago O’Hare) led by American Airlines, which operates to four US destinations. Its Chicago O’Hare service only started last December but will cease from 3 September. On flights to Miami there is competition between American Airlines, Aerolineas Argentinas and LAN Argentina. Delta has announced it will be flying five times weekly from New York’s JFK from 18 December providing American with increased competition.

Non-stop flights to European destinations are limited to Spain (both Barcelona and Madrid), Germany (Frankfurt with Lufthansa, which began last October), France (Air France to CDG) and Italy (both Alitalia and Aerolineas Argentinas to Rome Fiumicino). On flights to Madrid there is competition between Aerolineas Argentinas, Air Comet, Air Europa and Iberia. The UK market is not currently served by direct flights, though British Airways does offer four weekly flights via Sao Paulo.

From 24 November Australia will be served by Qantas operating three flights per week with a 747-400. 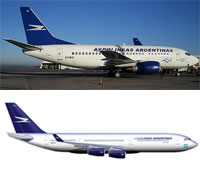 The strike-prone national airline, with its fleet of around 40 ageing aircraft, is currently majority owned by the Spanish Marsans Group which also owns Austral Airlines. There are ongoing discussions that control may be passed back to Argentinian investors, but this may jeopardise the airline’s chance of benefiting from the major aircraft order that Grupo Marsans placed last October. It signed a Memorandum of Understanding with Airbus for 61 aircraft, mostly A320s but also five A330s, four A380s and 10 A350-900s. Grupo Marsans also owns Air Comet in Europe.