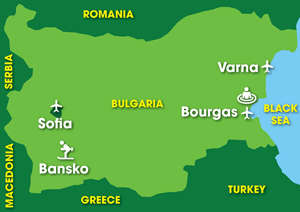 Passenger demand at Bulgaria’s three main international airports has almost trebled since 2000 with double-digit growth achieved every year. Last year Bulgaria joined the European Union and as a consequence the air transport environment was liberalised. Traffic to the Black Sea ‘summer sun’ destinations of Bourgas and Varna has not, so far, noticeably benefited. However, passenger numbers to Sofia, the country’s capital, soared last year by almost 25%.

Despite being the busiest airport in terms of annual traffic, Sofia’s summer traffic is easily surpassed by both Bourgas and Varna which have extreme seasonality profiles. For six months of the year Bourgas has virtually no airport traffic but during the peak summer months of July and August its passenger throughput is double that of Sofia’s. Sofia’s year-round consistency is helped by its proximity to some excellent ski resorts which are becoming increasingly popular with Western ski enthusiasts.

Traffic at Bourgas and Varna (both owned by Fraport of Germany) is dominated by foreign airlines bringing in-bound tourists to the Black Sea. In terms of weekly scheduled flights this July the leading country markets for Bourgas airport are the UK (11 weekly flights), Germany (10) and Russia (seven). For Varna the leading country markets are Austria (11 weekly flights), Hungary and Russia (nine) and Germany (seven).

While Bulgaria Air remains the principle carrier at Sofia it only has a 36% share of total scheduled seat capacity despite operating to 29 destinations across Europe and the Middle East. Lufthansa has an 11% share of capacity with just three routes to Dűsseldorf, Frankfurt and Munich.

LCCs have approximately 16% of capacity with Wizz Air leading the way thanks to its three routes to Dortmund, London Luton and Rome Fiumicino. SkyEurope (to Prague and Vienna), easyJet (to London Gatwick), MyAir.com (to Milan Bergamo and Venice) and Germanwings (to Cologne/Bonn) provide additional low-cost services. Ryanair does not currently serve Bulgaria at all. A total of 26 airlines are currently providing scheduled services though Iberia and KLM are notable absentees.

Some routes from Sofia are particularly competitive with three carriers fighting for business on the Athens, Rome Fiumicino, Prague and Vienna routes. On London routes Bulgaria Air (to Heathrow and Gatwick) faces competition from British Airways (to Heathrow), easyJet (to Gatwick) and Wizz Air (to Luton).

Recent additions this summer to the airport’s network include Bulgaria Air to Valencia, Flybaboo to Geneva, SkyEurope to Prague and Swiss to Zurich. Plans by clickair to start Barcelona services have been put on hold. This winter Aer Lingus will begin flying from Dublin (twice weekly) and easyJet will launch services to Manchester and Milan Malpensa (both thrice weekly).

Wizz Air to launch five new routes with second A320

Wizz Air has had one aircraft based in Sofia since early 2006 with which it currently serves the Dortmund, London Luton and Rome Fiumicino routes. The Rome flights depart Sofia at 05:50 while on certain days of the week the Luton service arrives in Sofia at 02:55 in the morning. From 24 July the airline will base a second A320 at the airport which will be used to operate new routes to Barcelona, Brussels Charleroi, Milan Bergamo, Valencia and a domestic route to Varna as well as other routes from Dortmund, Luton and Rome. A planned non-EU route to Izmir appears to have been put on hold. Barcelona flights operate to El Prat airport until mid-September after which Girona will be served instead.