Last year, privately-owned Philippine low-cost carrier Cebu Pacific saw passenger numbers grow by almost 60% for the second year in succession to 5.5 million. It is now the leading airline in the Philippine domestic market which witnessed growth of 23% in 2007, making it the world’s third fastest growing domestic market after India and Mexico. This year the airline has taken delivery of its first ATR72-500 turboprops which will enable it to open more new domestic markets where its 180-seat A320s either provide too much capacity or are too large to use the airports.

Last year, the airline operated 15 A319/A320s and has so far this year added two ATR72s and three further A320s. By the end of 2008 a further four ATRs will be delivered along with an additional A320. 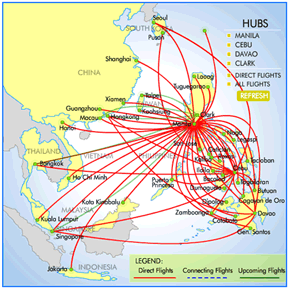 Cebu Pacific has bases at Manila and Cebu and recently opened its third base at Davao. The addition of the second ATR has enabled the airline to launch new daily services from Manila to Tuguegarao, Naga and San Jose on the island of Mindoro.

On the trunk route between Manila and Cebu (which Cebu Pacific operates 11 times daily and represents nearly 20% of all its domestic capacity) two daily flights depart before 05:00. In fact the airline operates nine daily flights that depart the airport before 05:00, enabling aircraft utilisation to be kept high and unit costs low.

Philippine Airlines is still the country’s leading international airline with a 27% share of scheduled seat capacity, offering 25 routes to 23 destinations in 14 countries. However, Cebu Pacific is catching up fast with 22 routes to 15 destinations in 10 countries giving it a 12% share of international seat capacity. Hong Kong and Singapore are served from all three bases.

So far this year the airline has already started new routes from Manila to Hanoi (10 April), Ho Chi Minh (11 April) and Kaohsiung (7 June). Thrice weekly services to Kota Kinabalu, the airline’s second destination in Malaysia after Kuala Lumpur, start next week (18 July) though frequency is reduced to twice-weekly from the beginning of August. Malaysia Airlines currently operates the route twice weekly.

Plans to open a fourth base at Diosdado Macapagal International Airport (formerly known as the US Clark Air Force Base) appear to have stalled due to a lack of reciprocal traffic rights on proposed international flights. Cebu Pacific had been hoping to operate from Clark to Bangkok, Hong Kong, Macau, Singapore and Taipei, but only the authorities in Singapore provided the necessary approvals to launch regular scheduled services.