The Seattle area is home to several legendary brands such as Boeing, Microsoft and Starbucks as well as being the location for Frasier. The area’s main airport, Seattle-Tacoma International Airport (SEA), is one of the top 20 in the United States and home to Alaska Airlines and its subsidiary Horizon Air. So far in 2008 its growth of 7.6% has been considerably better than most other major US airports.

The airport’s seasonality profile is very consistent with demand peaking in July and August and is at its lowest in January and February. The peak to off-peak ratio is around 1.6 (August to February). 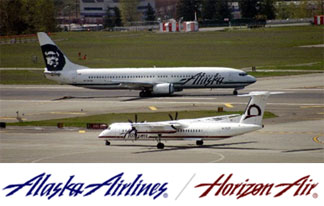 SEA’s biggest operator is Alaska Airlines, which along with its regional subsidiary Horizon Air, carried almost half of all passengers in 2007. Horizon’s traffic grew by 15% while that of Alaska Airlines grew by just 1.2%. Third ranked Southwest grew by 3.6% having decided not to pursue the idea of relocating all its services to Boeing Field. The six US ‘legacy’ airlines fill the next six ranking positions. The fastest growing airline at SEA in 2007 was Hawaiian Airlines whose passenger numbers increased by 52%.

Based on aircraft movements the most popular domestic regions were the Bay Area of California, Los Angeles, Portland, Spokane and Chicago. Alaska (combined with Horizon) offers at least 100 weekly departures on several routes from SEA. Topping the list is Portland (with 172 flights) followed by Anchorage (139), Spokane (111) and Los Angeles (100). Several routes have three or more carriers serving them.

The route to Beijing is served by Hainan Airlines which began operating the route four-times weekly on 9 June. Northwest is planning to join them in the market next March. Several other international routes are relatively new including Air Canada’s services to Calgary, Lufthansa’s Frankfurt service, AeroMexico to Mexico, Air France to Paris and Northwest to Heathrow.

New domestic routes in the last 12 months have included JetBlue to Long Beach and San Diego, AirTran to Baltimore/Washington and Milwaukee, Alaska Airlines to Honolulu, Southwest to Denver and Virgin America to Los Angeles and San Francisco. As a result LCCs now have an estimated 16% share of scheduled seat capacity.

Before the end of 2008, Alaska Airlines intends to start new services to Minneapolis/St Paul (twice daily from 26 October and in direct competition with Northwest and Sun Country Airlines) and Kona in Hawaii (daily from 17 November).