Now that Air Berlin has decided to abandon its plans to acquire Condor from Thomas Cook the future of this significant player in the German holiday market is once again unclear. Transporting over seven million passengers per annum with an average load factor of well over 80% on its fleet of 13 757s, 12 A320s and nine 767s the airline can trace its origins all the way back to 1955.

With its roots firmly in the charter sector the airline does allow seat-only purchases and many of its operations are now listed as scheduled flights.

Big in Frankfurt, bigger in Spain 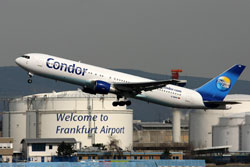 Based on scheduled data Condor’s biggest operational base in Germany (by some distance) is Frankfurt Main airport from where it operates over 120 weekly departures. Spanish destinations account for around half of the airline’s flights at most other German airports, but at Frankfurt Condor operates an extensive network of low frequency longer-haul flights to Africa, the Caribbean, North America and South America.

Spanish destinations account for 45% of the airline’s scheduled seat capacity with almost half of all flights operating to and from Palma where Air Berlin has a major base. Turkey with around 18% of capacity and Greece with around 14% are the other main country markets served from Germany during the summer, followed by Egypt, the Dominican Republic and Canada. Some 26 country markets are served this summer including Cuba where Condor flies to Havana, Holguin and Varadero.

Demand is very seasonal and Condor’s passenger numbers last summer were over 800,000 in July and August compared to just half that in January, February and December.

In 2006 Condor launched Condor City Flights from Munich using two 174-seat A320s. This was an attempt to mimic Air Berlin’s similar “City Shuttle” concept from other German airports. Scheduled ‘seat-only’ flights were offered to Barcelona, Brussels, Budapest, Genoa, Istanbul, Marseille, Naples, Pisa, Prague, Rome and Venice. For the winter season Madrid and Paris were added but many routes were dropped due to a lack of demand in winter. Inclusive one-way fares were offered from €29. The concept appears to have been gradually phased out and most of these destinations are no longer served by the airline.

As part of the airline’s enhanced product it is installing a Premium Economy Class section in its fleet of nine 767s. This will be completed in time for the winter season. Much of the airline’s winter capacity is already on sale and responding to customer demand there will be frequency increases on long-haul routes to Cancun, Phuket, Punta Cana and Varadero.