Last week Egyptair (one of the world’s oldest airlines) became the latest (and 21st) airline to join the Star Alliance at a lavish ceremony in Cairo. Its network of 1,624 weekly flights across 69 destinations served by a mix of 50 Airbus, Boeing and Embraer aircraft carried some 6.8 million passengers in 2007, up over 20% on the previous year. From its base at Cairo International Airport (CAI) the airline serves 59 international destinations in 43 countries, plus eight domestic destinations supported by its subsidiary Egyptair Express, which operates a growing fleet of Embraer 170 regional jets.

Compared with its rivals in the Middle East, Egyptair has the benefit of a significant domestic market (in which it has a virtual monopoly) and well-established tourism infrastructure. The top 12 country markets served are a mixed bag featuring regional markets, Europe, North America and Asia.

The single biggest route from Cairo is to Jeddah where the airline operates almost 12,000 weekly one-way seats in competition with Saudi Arabian Airlines. The next busiest routes are domestic ones to Luxor, Sharm El-Sheikh, Hurghada and Aswan. 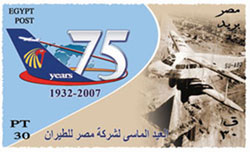 Serving 14 European countries but none in Scandinavia

Egyptair serves 14 European countries with Germany the leading market. The airline serves Berlin, Dűsseldorf, Frankfurt and Munich with a total of 20 weekly departures. Italy is also served with 20 weekly flights but to only two destinations – Rome Fiumicino and Milan Malpensa. There are also at least daily flights to the UK, France, Greece and Spain. At the start of the summer season flights to Paris were transferred from Paris Orly to Paris CDG. Currently there are no services to any of the Scandinavian countries.

Among its long-haul network Egyptair serves Bangkok, Johannesburg and New York JFK daily. There are also five weekly flights to Japan split between Tokyo and Osaka. However, the Indian market is served by just three weekly flights to Mumbai. Compare this with the vast network of Indian routes that the likes of Emirates, Etihad and Qatar Airways are developing to help support the construction boom in the UAE.