The so-called “EuroAirport Basel Mulhouse Freiburg” (BSL/MLH), more usually known simply as Basel Airport, has several unusual features due to its geographic location straddling the French-Swiss border. This includes separate exits from baggage reclaim depending on which country you want to end up in.

Between 1990 and 2000 traffic doubled at BSL as Swiss regional Crossair grew quickly and profitably. However, following the dramatic collapse of Swissair in 2001 the ‘new’ Swiss International Air Lines was created by Crossair which had acquired the failed airline’s assets. As a consequence the Basel operations were scaled down and the focus was on rebuilding the Zurich hub.

Basel’s traffic fell by 30% between 2000 and 2003 leaving the airport with considerable spare infrastructure capacity.

easyJet to the rescue

The airport’s future was revived when easyJet negotiated a deal to make Basel its second Swiss base (after Geneva) in June 2005. easyJet flights from Liverpool and London Stansted had already started in March 2004, but when the first aircraft were based there the following summer the number of destinations served increased rapidly to 13.

Since then the only routes that easyJet has dropped from Basel were to Munich (double-daily during winter 2006), Paris CDG (which operated between October 2005 and October 2007) and Prague. Lufthansa and Air France provided stiff competition on the first two routes while Swiss now serves Prague.

easyJet is now the leading airline at the airport in terms of scheduled seat capacity and currently offers services to 20 destinations. Swiss, which had operated just a handful of routes (Amsterdam, Brussels, London, Zurich) for some time, launched several new routes in 2007. These included Barcelona, Budapest, Manchester, Nice, Prague and Warsaw. Three of these (BCN, NCE, PRG) were in direct competition with easyJet. Swiss has since dropped the Nice service while easyJet has dropped Prague, leaving Barcelona and Amsterdam as the only remaining head-to-head routes.

Other LCC operations include Iceland Express to Reykjavik and Atlas Blue to Marrakech. Other domestic flights are offered by Twinjet, which operates 19-seat Beech 1900s, double-daily (Monday to Friday) to Marseille and Toulouse, while Airlinair operates nine times per week to Rennes. Scheduled long-haul flights are currently limited to a weekly service to Montreal with Air Transat.

Last October Ryanair launched its first flights to Switzerland when it began serving Basel from Stockholm Skavsta. Within a month it was also operating routes from Alicante, Barcelona Girona, Dublin and Valencia. However, this winter Ryanair will be suspending all services to Basel from early November to mid-December before starting a new London Stansted service.

Basel is one of seven airports where Ryanair is temporarily suspending  all operations for a six week period this winter. The others are Budapest, Krakow, Palma, Rzeszow, Salzburg and Valencia. 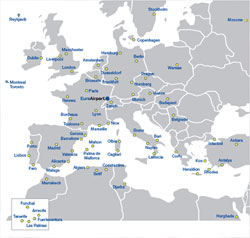 Basel’s seasonality profile is not that extreme, though unlike Geneva it is not ideally located to benefit from winter ski traffic. Traffic during the last winter was down around 5% primarily because of year-on-year capacity cutbacks by easyJet, which was no longer operating high frequency routes to Munich and Paris and had halved capacity on its London Luton service.
Compared to last summer easyJet has added routes to Cagliari (twice-weekly), Marrakech (thrice-weekly) and Porto (thrice-weekly) while losing Paris and Prague services.

London market about to get extremely competitive

The UK market is ranked only fourth behind France, Germany and Spain which all have around 19% of scheduled capacity. A total of 23 international country markets are served including Algeria, Serbia and Russia. There are currently no scheduled flights to Croatia, Finland or Norway.