Interjet has grabbed 10% share of Mexican domestic market; has applied for California and Texas flights

Grupo Aleman owned Mexican LCC Interjet began operations on 1 December 2005 from Toluca (TLC), an airport around 50 kilometres from Mexico City’s main international airport. With an initial fleet of seven 150-seat A320s (ex-Volare aircraft) the airline has grown rapidly to take a 10% share of the Mexican domestic market. In June it took delivery of the first two of 20 aircraft it has on order with Airbus. However, with just 150 seats on board, the airline appears to be taking the JetBlue approach rather than following the pure low-cost model of Air Arabia, Tiger Airways or Wizz Air. 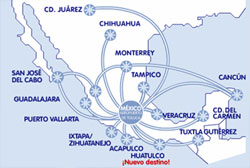 Average load factors improved from just 52% in 2006 to almost 65% in 2007. Most of Interjet’s routes are to and from Toluca but the airline also operates three other routes directly linking nodes on its hub and spoke style network. Although Toluca is a secondary airport for Mexico City Interjet is not the only airline using it as a base for low-cost domestic operations. Volaris competes head-to-head with Interjet on seven of its 14 non-stop routes from Toluca. These seven routes represent around 70% of Interjet’s Toluca-based capacity. The highest frequency routes that Interjet operate are to Monterrey (48 weekly departures), Guadalajara (36), Cancun (27), Ciudad Juarez (18) and Acapulco (15). (Source: OAG Max Online)

Flights to Merida and the airline’s first international route to Guatemala City (which began last November) appear to have been discontinued. However, a new domestic route to Huatulco began recently. 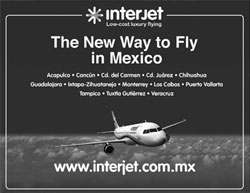 Last month the airline filed an application seeking permission from US authorities to start services to California and Texas. Interjet wants to start daily flights as soon as permitted from Toluca to Ontario (California) and Houston. Continental already flies between Houston (IAH) and Toluca using 50-seat CRJs.

Once the first two routes have been approved Interjet wants to start daily service from Toluca to San Antonio (from November 2008) followed by double-daily services between Guadalajara and Houston (from June 2009) and between Monterrey and Houston (also from June 2009). The City of Houston and Greater Houston Partnership have already submitted their support for these routes.