Unlike Italy’s two biggest airlines, Alitalia and Air One, third-ranked Meridiana tends to keep a relatively low profile from its base at Olbia in Sardinia. The airline began life as Alisarda in 1964, created by the Aga Khan Karim to support tourism in Sardinia. In 1991, when it began international services, it changed its name to Meridiana and has since grown steadily.

Last year the airline carried 4.6 million passengers on a fleet of 22 aircraft, consisting of nine MD82s, nine MD83s and four rather newer A319s. It also wet leases an ATR42 from Avanti Air to operate some of the thinner routes. However, recent reports suggest that it intends to replace most of the fuel-thirsty MD82s and MD83s with new and leased A320s. Profitability has been marginal in recent years (load factors average between 65% and 70%) and the recent surge in fuel prices suggest that significant losses are likely in the short-term.

To enhance its business opportunities the airline is now a majority shareholder in Eurofly, an Italian leisure airline with a fleet of A320s and A330s, but a full merger is not yet planned.

Meridiana’s two busiest airports are Cagliari and Olbia, both in Sardinia. All of its top 10 airports are in Italy though it has surprisingly few flights from either Milan Malpensa or Venice Marco Polo.

At Cagliari and Olbia Meridiana operates around half of all flights making it the major carrier to and from Sardinia. It also has significant market shares in Florence and Verona.

Meridiana’s A319s are based in Florence from where the airline operates international flights to Amsterdam, Barcelona, Berlin Tegel, Budapest, London Gatwick, Madrid and Prague. The airline’s leading international destination is actually Paris CDG which it serves non-stop from Cagliari, Catania, Milan Linate, Olbia and Palermo.

Other international destinations served include Chisinau (in Moldova) and Pristina (in Serbia/Kosovo). New international routes started this summer include thrice-weekly flights from Florence to Berlin Tegel and thrice-weekly flights from Verona to Madrid. Last November a Turin to Krakow service was introduced (to replace SkyEurope services which had been axed) but this route appears to be ending in September. 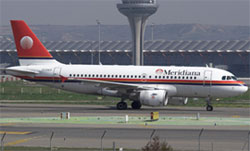 Although Meridiana operates 52 routes this summer just three routes account for around a quarter of the airline’s flights. From Cagliari there are 56 weekly departures to Rome Fiumicino, while from Olbia Milan Linate is served 49 times weekly and Rome Fiumicino 37 times weekly.