Ryanair increases Weeze network from six to 21 routes in less than a year; up to 33 by end of 2008 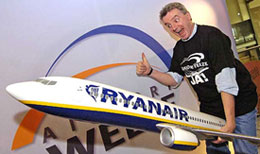 Ryanair opened its third German base at Weeze near Dűsseldorf in June 2007. It had been operating to the airport since April 2003 when London Stansted services first started arriving. Last October an additional aircraft was based at the airport and further new routes were started. By the end of 2007 Ryanair had handled over 830,000 passengers through the airport.

Analysis of traffic data for 2007 and 2008 reveals which routes have achieved the highest, and lowest, load factors. Monthly load factors for all 21 routes since January 2007 are shown below.

Although most routes achieved better than 80% loads during July and August last year the network average was below 80% due to the influence of the London Stansted route which has the most capacity. Average network load factors have only twice fallen below 60%, in January of 2007 and 2008. For much of 2007 the Barcelona Girona route consistently generated the highest monthly load factors. The top five routes in terms of load factors and passengers are summarised below.

Vaxjo not yet delivering

During the winter period two routes have performed notably worse than all the others. The new route to Vaxjo in Sweden (the airline’s first route to that airport) has averaged well under 50% load factor while Alghero in Sardinia (which performed well in summer) has proved a much harder proposition to promote in winter with average loads of under 35% for three straight months.

Another aircraft in October will add another 11 routes

A new route to Edinburgh began in June and from the end of October there will be two additional 737-800s based at Weeze bringing the fleet there to six aircraft. These new aircraft will be used to support new routes to Ancona, Berlin, Birmingham, Dublin, Faro, Gothenburg, Manchester, Oslo, Riga, Santander and Tenerife.