Austrian still has no competition on half of its routes; but LCCs have 22% of Vienna capacity 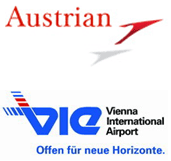 Austrian Airlines has made it clear that it would like to enter a strategic partnership with another airline to help secure its long-term future. However, it has also stated that it could survive as a ‘stand-alone’ airline, but only with a significant reduction in its fleet and network. Austrian is still the dominant airline at its home base of Vienna and offers non-stop services to over 130 destinations.

Four of the next five largest airlines at the airport are LCCs and when the market shares of Aer Lingus, clickair and easyJet are added in some 22% of capacity at Vienna is provided by low-cost airlines.

Austrian still has monopoly on over 50% of ASKs

While Austrian may have serious competition from lower cost carriers on many European routes, it still has a monopoly on some 52% of the ASKs that it flies. Out of Austrian’s 133 routes at Vienna, 66 have no direct competition including long-haul routes to Canada, India, Japan and the USA, as well as five domestic routes which are all served at least four times per day.

A further 48 routes have just a single competitor, while 17 European routes have two direct competitors. On flights to Frankfurt (Adria Airways, Lufthansa, niki) and Rome Fiumicino (Air One, Alitalia, niki) Austrian is one of four airlines operating the route.

Vienna’s LCC share not as high as Munich, Oslo and Stockholm

One of Austrian’s explanations for its poor financial performance is the high proportion of LCC traffic at its hub base. A total of seven major European LCCs have a presence at the airport and according to current schedule data they account for around 22% of total scheduled capacity.

A comparison of the major hubs of other European flag carriers reveals that two of SAS’ three Scandinavian hubs have a higher LCC presence, as does Lufthansa’s secondary hub at Munich. The dominant hubs of Europe’s ‘big 3′ of Air France (Paris CDG), British Airways (London Heathrow) and Lufthansa (Frankfurt) all have less than 10% of capacity flown by LCCs, although Finnair is in the best position of having less than 2% of capacity at Helsinki supplied by LCCs.

Austrian has put back the launch of its two new Saudi Arabian services from mid-August to early October, while axing two routes that it started during the last two years. Double-daily flights to London City which only began in March this year end next week, while six times weekly Chicago O’Hare flights come to an end at the close of the summer season. Unless a strategic partner is found other such route cancellations may follow.