Passenger numbers at Helsinki-Vantaa airport increased by a healthy 8% in 2007, continuing a positive trend that has resulted in traffic growth of 35% between 2003 and 2007. However, while demand on international routes increased by 45% during this period, domestic traffic rose by just 7%. Domestic demand is still below the peak of just over three million passengers which was achieved back in 2000.

Helsinki’s demand is relatively stable across the year though traffic usually peaks in June. 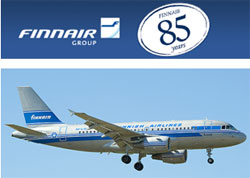 With almost 60% of capacity Finnair is more dominant at its home base than just about any other national carrier among EU member states. Its route network features nine domestic destinations and a growing portfolio of Far Eastern routes. It serves three cities in China (Beijing, Guangzhou, Shanghai), three in Japan (Nagoya, Osaka Kansai, Tokyo Narita) plus Hong Kong, Mumbai and Delhi, Seoul and Bangkok.

To celebrate its 85th birthday Finnair has recently started operating an Airbus A319 rebranded as a 1950s-style retro plane called Silver Bird. Until the end of the year the aircraft and its retro attired cabin crew will operate flights to several domestic and international destinations.

Finnair operates more flights to Stockholm Arlanda than any other destination and competes head on with SAS and main local rival Blue1, which is owned by SAS. Blue1 also competes on three domestic routes as well as serving 14 European destinations, including London Heathrow which it started this summer. The airline previously served London Stansted.

Finncomm which operates a mix of ATR42s, ATR72s and ERJ145s operates almost exclusively on domestic routes from Helsinki (with the notable exception of Tallinn) and has a codeshare agreement with Finnair on many of its routes. In total 26 airlines currently operate scheduled services from Helsinki, including several other national airlines such as Aeroflot, Austrian, British Airways, Brussels Airlines, Czech Airlines, Estonian Air, Icelandair, KLM, LOT, Malev and Turkish Airlines.

A total of 37 foreign countries are served with scheduled services this summer. Germany, Sweden, the UK and Denmark are the leading country markets based on scheduled seat capacity. Finnair serves two destinations in the US, New York JFK (daily) and Boston (twice-weekly). It also serves Toronto thrice-weekly.

Over the years several LCCs have tried to make Helsinki routes work, including KLM’s UK-based off-shoot buzz which operated daily from London Stansted during 2000 and 2001 and FlyingFinn which flew MD90s also to London Stansted during 2003. Sterling set up a base very briefly in March 2006 but abandoned the project after less than five months. Last winter Volareweb began daily flights from Milan Malpensa but the route was discontinued for the summer season, while Germanwings flew from Cologne/Bonn between March 2004 and October 2007. clickair abandoned Barcelona services less than a year after starting them in May 2007, while Vbird (remember them?) operated daily flights from Dűsseldorf Weeze / Niederrhein between October 2003 and October 2004.

Currently, Aer Lingus flies twice weekly to Dublin (the route was started last October), and Air Berlin (which is not really an LCC any more) flies six times weekly from Dűsseldorf and Berlin Tegel.

Ryanair does not operate to Helsinki but serves Tampere from five of its bases, plus an additional route to Riga. Tampere airport is fewer than 150 kilometres from Helsinki airport but even Ryanair has made no attempt to sell the airport as a secondary airport for Helsinki.

… but easyJet coming in November

Despite the poor track record of LCCs in Finland easyJet is starting its first route to Helsinki from London Gatwick on 3 November. Flights will be daily and will compete indirectly with flights to Heathrow operated by Finnair (four flights daily), Blue1 (daily) and British Airways (twice daily).

Routes started in the last 12 months by other carriers include Estonian Air to Tallinn (September 2007), Volareweb to Milan Malpensa (October 2007), Aer Lingus to Dublin (October 2007), Blue1 to London Heathrow (March 2008), Cimber Air to Norrkoping (March 2008) and Finnair to Seoul (June 2008). A new Finnair service to Ekaterinburg in Russia begins next month.