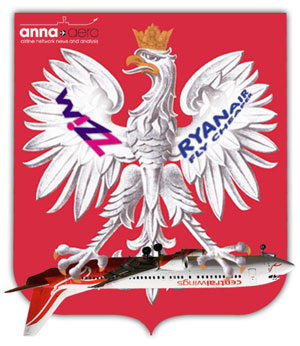 The decision by LOT to cease scheduled operations by its low-cost subsidiary Centralwings at the end of this month comes as no great surprise given the hugely competitive nature of the Polish low-cost market.

Since joining the EU in May 2004 growth at Polish airports has been driven primarily by LCCs who now have a 54% share of scheduled capacity on international routes to and from Poland. The leading LCCs in Poland, Wizz Air and Ryanair, now account for over one-third of all international scheduled seat capacity.

A total of 13 recognised LCCs currently operate flights to and from Poland. Wizz Air owes its leading position to having established bases in Gdansk, Katowice and Warsaw. Ryanair does not currently have a base in Poland whereas Norwegian has set up an operating base in Warsaw.

Since it started operations in February 2005 Centralwings has operated scheduled services from Gdansk, Katowice, Krakow, Lodz, Poznan, Szczecin, Warsaw and Wroclaw. For most of this time around 60% of its capacity has been allocated to routes serving Ireland and the UK, where it faced fierce competition from ultra-low-cost competitors such as Ryanair and Wizz Air. However, it has also operated flights to a range of Mediterranean beach and island destinations as well as cities such as Amsterdam, Bologna, Lille, Lisbon, Paris Beauvais and Rome. Its current schedule of just under 30 routes will all cease by mid-October at the latest.

UK and Ireland will feel Centralwings’ demise most

An analysis covering the last year shows which country markets have been growing fastest as a result of LCC operations. The UK and Ireland will be hardest hit by the cessation of scheduled services from Centralwings.

Even before this final reduction the number of weekly frequencies to the UK and Ireland was already lower than at the start of the summer season. In May bmibaby dropped flights from both Cardiff and East Midlands to Gdansk, while easyJet ended Gdansk services to Belfast, Bristol, Edinburgh and London Gatwick around the same time. Germany has now overtaken Ireland as the second biggest country market for LCCs from Poland while Norway has leap-frogged Italy and Sweden into fourth place.