The collapse of Aloha Airlines earlier this year has not surprisingly had a major impact on traffic flows through Hawaiian airports. According to USA Today domestic capacity at the islands’ biggest airports will be down around 30% this November compared with a year ago.

Passenger numbers at the islands’ airports have remained relatively stable over the last 10 years. Having reached 37 million in 2000 traffic dropped to just under 31 million in 2003 but by the end of 2007 it had bounced back to just over 36 million.

Honolulu is by far the region’s busiest airport with around 60% of all passenger traffic. It is also the main gateway for passengers from the ‘lower 48′ and international passengers.

The almost 9% growth in 2007 can be attributed in part to the emergence of Go!, a regional airline owned and operated by Mesa Airlines and not to be confused with Go Air of India or Go-Fly, the former European LCC created by British Airways. However, Go!’s emergence appears to have been one of the contributing factors leading to Aloha’s demise at the end of March. With its fleet of over 20 737s Aloha operated primarily inter-island services.

Honolulu’s scheduled traffic can be segmented as follows:

Two-thirds of flights from Honolulu are to the five other largest airports in Hawaii: Kahalui, Kona, Lihue, Hilo and Molokai. On these inter-island routes Hawaiian Airlines has an 80% share of seat capacity and a 56% share of flights. Go! has a 30% share of flights but just 15% of seats as it uses a fleet of seven 50-seat CRJs whereas Hawaiian’s average aircraft size on these routes is 129 seats. 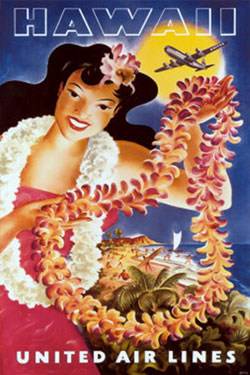 California is almost 4,000 kilometres away

Traffic to the US mainland is dominated by flights to Los Angeles and San Francisco. The distance to San Francisco is 3,850 kilometres while Los Angeles is just over 4,100 kilometres away. These two destinations, plus Seattle, account for around half of all flights from the mainland to Honolulu. Hawaiian with 10 routes has the highest market share on routes from Honolulu to the mainland.

Japan has two-thirds of international market

Internationally Japan is the dominant market from Honolulu. Two-thirds of international seats are heading either for Nagoya, Osaka Kansai or Tokyo Narita with services provide by Air Japan, China Airlines, Jalways, Northwest or United. Narita alone is served with 68 weekly departures with Japanese carriers operating twice as many flights as US carriers.

* “Happy Hawaii” was the b-side of Abba’s global smash hit “Knowing me, knowing you” in 1977. An animated video for the song (featuring an Abba branded Boeing 747) can be found at http://www.youtube.com/watch?v=SXDzP9YMBCs