As the European airline industry seems obsessed with consolidation and mergers it is nice to discover that a small regional airline has recently celebrated its 50th birthday. OLT (Ostfriesische Lufttransport GmbH) was founded in Emden, Northern Germany in 1958 and initially specialised in serving the small coastal and island areas of Germany’s North Sea coast.

The airline currently operates a mixed scheduled fleet ranging from Britten-Norman Islanders with just nine seats, through 18-seat Metroliners, to 33-seat Saab 340s, 50-seat Saab 2000s and its recently introduced first ever jet aircraft, a couple of 100-seat Fokker 100s. The F100s have been used to operate charter flights on behalf of Thomas Cook from Bremen to Palma this summer as well as acting as a corporate jet for Airbus employees travelling between the major facilities in Hamburg and Toulouse. Since 5 September a weekly scheduled flight also operates from Toulouse to Hamburg on a Friday night returning on Sunday evening. 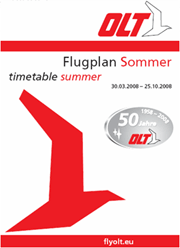 The airline has the rare distinction of having driven a low-cost rival off a route. In December 2005 easyJet began daily flights (excluding Saturday) between its base in Bristol and Hamburg. OLT was operating twice-daily weekday services with 50-seat Saab 2000. Being a predominantly business route frequency triumphed over price and easyJet quit the route at the end of October 2006.

Bremen is biggest scheduled base

According to OAG data the airline operates 19 scheduled routes involving 21 airports. The biggest airports for scheduled flights are:

From Bremen the airline operates double-daily to Brussels, Copenhagen and Nuremberg; and daily to Hamburg, Munich and Toulouse. There are virtually no flights at weekends as these are all considered pure business routes. Weekend flights are operated on its ‘island’ services to Borkum and Helgoland, from mainland airports at Emden and Bremerhaven and Cuxhaven.

In June the airline terminated flights between Hamburg and Erfurt. The route had been operated twice daily on weekdays using 19-seat Metroliners. 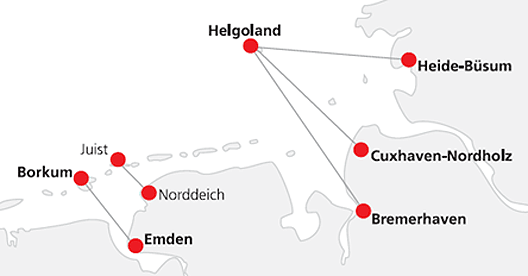