Singapore’s status as a ‘world city’ takes another step forward this weekend as it hosts its first ever Formula One Grand Prix. As if that were not enough it will be the first ever Grand Prix to be held at night under street lights. Meanwhile, the national airline Singapore Airlines (SIA), which was the first to fly the A380, has just received its sixth aircraft of the type. In the airline’s latest financial year (ending 31 March 2008) it carried just over 19 million passengers and its average load factor for the year surpassed 80% for the first time. More significantly, it reported record profits of 1.64 billion Singapore Dollars. 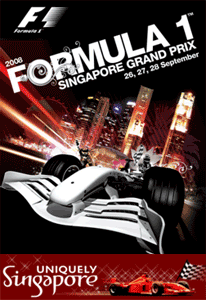 SIA currently serves 57 destinations with non-stop services using a fleet of just over 100 aircraft. All aircraft in its fleet are widebodies, with 76 777s forming the backbone of the fleet, complemented by A340s, 747-400s and of course the A380s. Routes to Jakarta, Hong Kong and Kuala Lumpur have the highest weekly capacity. SIA has around 47% of all scheduled seat capacity at Singapore Changi Airport, consistently voted as one of the best airports in the world.

Among the long-haul destinations Sydney, London Heathrow and Melbourne are the busiest. The UK flights at just under 11,000 kilometres are not the airline’s furthest. It operates non-stop to Los Angeles (14,094 km) and New York Newark (15,328 km). These two routes are both served by A340-500s re-equipped in a new all Business Class configuration, providing just 100 seats on each aircraft.

New York JFK is one of seven destinations only served via an en-route stop (in this case, Frankfurt). The other destinations served in this way are Barcelona (via Milan Malpensa), Houston (via Moscow DME), Istanbul (via Dubai), Jeddah (via Abu Dhabi), San Francisco (via Hong Kong and Seoul) and Vancouver (via Seoul).

The most recently started route was to Houston (via Moscow), which began a four-times weekly service on 20 March. A new service to Riyadh (via Dubai) is expected to launch in mid-December. This will be the airline’s second destination in Saudi Arabia. Services between Taipei and Los Angeles will end on 1 October. Both of these destinations are served non-stop in their own right.

SIA’s growing fleet of A380s are currently used on routes to London Heathrow (twice daily), Sydney (daily) and Tokyo Narita (daily). The aircraft operates with 471 seats of which 12 are in First Class, 60 in Business Class and the remaining 399 in Economy.