Boom times are over in Mexico (except Cancun); Q2 growth is back to below 5%

Figures for the second quarter of 2008 show that Mexico’s domestic market growth has returned to more normal levels with growth of around 3% compared with the 17% growth achieved during the first quarter. This brings to an end a 20-month period of double-digit growth fuelled by the burgeoning low-cost sector.

As a result the low-cost share of the domestic market has now stabilised at around 43%. Volaris has continued to close the gap on Mexicana and is now firmly established as the third largest domestic airline in Mexico.

With Mexican LCCs still struggling to get approval to operate internationally the market share of carriers on international flights is more stable. International traffic growth has also fallen in the second quarter of 2008 to under 6% compared with 13% during the first quarter.

Early Q3 data not helped by grounding of Aerocalifornia

More recent data provided by the operators of Mexico’s airports shows that two of the three major airport groups in Mexico reported a fall in traffic in both July and August. Contributing factors include the grounding of Aerocalifornia in July and the decision by Avolar to cut its operating fleet from eight to just four aircraft for the rest of the year.

Outside of Mexico City the country’s major airports are operated by one of three companies. 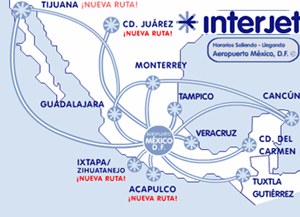 Only ASUR, whose biggest airport is Cancun, has reported significant growth in the last two months. Cancun’s domestic traffic grew by 11.4% in August while international traffic advanced by an impressive 23.8%. Cancun’s total traffic was up 19.7% helping the ASUR group report a 12.9% increase in passenger numbers in August. In December JetBlue will launch daily flights from Tampa to Cancun. These will complement the daily flights to Orlando the airline started in March.

AICM has yet to report figures beyond June but will be benefiting from the decision by Interjet to re-assign several of its Toluca-based aircraft to Mexico City after the airline bought Aerocalifornia’s landing slots. Using them, it has started 11 domestic routes since mid-August. However, Mexican authorities are still investigating whether the slot acquisition was entirely legal and the airline may have to re-bid for them, accept inferior slots, or even hand them back according to local sources.