Kuala Lumpur International Airport (KUL) was opened in 1998 to replace the ‘downtown’ airport at Subang where traffic had more than doubled in just seven years from 7.5 million passengers in 1990 to 15.8 million in 1997. Ironically, the opening of the new airport coincided with a major economic downturn in parts of Asia and Kuala Lumpur’s traffic fell over 8% in 1998.

The domestic market accounts for just over one-third of KUL’s traffic. Malaysia Airlines serves 13 domestic destinations from KUL all of which are also served by AirAsia. AirAsia also serves two additional destinations. Using mostly 180-seat A320s AirAsia has a capacity share of 53% in the domestic market from KUL though its frequency share is 49%, compared to Malaysia Airlines’ 51%. The top three domestic destinations, which account for nearly half of all domestic flights from KUL are Kota Kinabalu, Kuching and Penang each of which are served with over 100 weekly departures.

Passengers on international flights account for almost two-thirds of KUL’s traffic. There are direct flights from 38 different countries with the leading country markets being Indonesia (19.6% of capacity), Thailand (12.2%), Singapore (10.9%) and China (9.1%). These four countries account for over half of all international capacity. Hong Kong, Australia, India, Vietnam, UAE and Japan round out the top 10.

The leading European markets are the UK and Netherlands which are both served double-daily. Frankfurt, Paris, Rome and Stockholm are also served non-stop but with lower frequency. All flights are operated by Malaysia Airlines with the exception of KLM, which operate one of the daily frequencies from Amsterdam (which then travels on to Jakarta). Lufthansa does serve KUL but via Bangkok. Maybe surprisingly there are no direct services to anywhere in North America.

Malaysia Airlines is the dominant airline on international routes with a 38% share of international capacity, offering non-stop flights to 48 destinations. 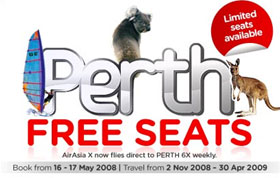 The AirAsia group is not only represented by AirAsia and Indonesia AirAsia but also by AirAsia X which began long-haul, low-cost services last November to the Gold Coast in Australia with an A330. In February flights to Hangzhou in China were added and in November services start to both Melbourne and Perth.

In February 2008 low-cost airlines were finally allowed to start operating between Kuala Lumpur and Singapore. Previously a cosy duopoly between the flag carriers, other carriers were belatedly allowed to operate the route.

Additional daily frequencies were limited to two from airlines in each country. AirAsia operated the two additional Malaysian frequencies while JetStar Asia Airways and Tiger Airways shared the Singapore frequencies.