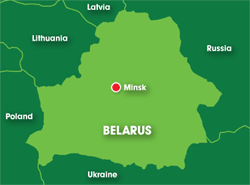 The good folk of Minsk, the capital of Belarus, recently had the dubious privilege of welcoming English football fans to their country as England took on the national team as part of their attempts to qualify for the World Cup in 2010 to be held in South Africa. No doubt some charter flights will have given a boost to Minsk’s airport traffic which has yet to reach one million passengers annually, despite this being the main airport for a population of some 10 million people living in a country not much smaller than the UK. The impressive terminal is designed to handle up to five million passengers so no new infrastructure should be required for a while.

The 100% government-owned flag-carrier Belavia operates a relatively small fleet consisting of five TU-154s, six 737s and a solitary CRJ. Another CRJ was destroyed in a non-fatal accident at Yerevan in Armenia earlier this year. Passenger numbers were up almost 30% in 2007 while average load factors have improved from under 60% in 2003 to just under 70% in 2007. The carrier currently operates to 20 destinations including four in Russia which account for half of the airline’s scheduled capacity. Moscow Sheremetyevo is served thrice daily while Moscow Domodedovo is served twice daily. Both of these routes are operated by a mix of Russian and Western aircraft.

Belavia serves a number of destinations in Western Europe including Berlin, Frankfurt, London Gatwick, Milan Malpena, Paris CDG and Rome Fiumicino. None of these destinations are served more than three times per week.