This winter – Ryanair versus the world! 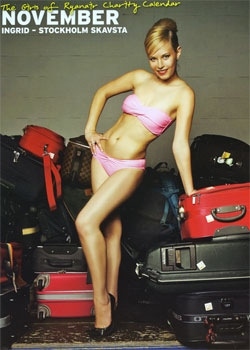 Ingrid of Ryanair’s Stockholm Skavsta base will be flying new routes to Wroclaw, Prague and Lodz this winter (and charging €10 for each of these bags). The frequencies are 3-4 per week which is average for the 93 new services Ryanair is starting this week – 47% of the global total logged by anna.aero.

This week’s analysis of new routes launched during the last week (Saturday 25 October – Friday 31 October) covers the start of the winter scheduling period on Sunday 26 October. This winter anna.aero has logged a total of 195 routes starting this week. A year ago some 238 new routes were identified. Of this year’s 195 new routes one airline is responsible for a massive 93 (or 47%) of them. Yes, once again Ryanair is bucking the industry trend by expanding while others are contracting. Last year at this time it started 69 routes. In other words, routes started by all other airlines in the world have fallen from 169 last winter to 102 this winter, a reduction of almost 40%.

A year ago the A380 was making its maiden commercial flights with Singapore Airlines. This year we have the closing of a historic airport (Berlin Tempelhof) and the bankruptcy of one of Europe’s larger low-cost airlines (Sterling).

However, this week also sees the launch of two new airlines. Air Busan is the low-cost subsidiary of Asiana which is taking over flights between Busan and Seoul Gimpo in Korea. Meanwhile in Yemen, Felix Airways begins domestic operations with a couple of CRJ700s.

Although Europe lost the use of Tempelhof, a new airport opened in Spain. Ciudad Real welcomed Iberia (Air Nostrum) flights from Barcelona and Gran Canaria. The airport is some way south of Madrid but linked to the city via the Ave high-speed rail link.

The next busiest airline after Ryanair is Norwegian which launched 13 new routes this week. Most of these are relatively low frequency routes but there are also some new daily domestic routes from Oslo Rygge, another of Europe’s newer airports. easyJet launched six new routes including its first domestic route in Portugal, and two routes from Paris to Morocco. Wizz Air launched five new routes including its first flights to Bologna and Timisoara.

In keeping with recent trends many of Ryanair’s new routes are starting at relatively low frequency. The average across the 93 routes is less than four weekly flights. This comes as no great surprise as demand on most routes will be less in winter than during summer. Growth this winter is being focussed on some of the new bases such as Birmingham and Weeze, though bases at Bergamo, Bremen, Bristol, Charleroi, East Midlands, Girona, Hahn, Liverpool, Luton, Marseille, Skavsta and Stansted all get at least three new routes while Forli flights have been redirected to Ryanair’s new base at Bologna.

To see the latest information we have on routes that have recently been dropped or soon will be, check out our unique downloadable Route Recycle Bin spreadsheet. We currently have over 450 routes in our database which may be of interest to carriers. We have recently added routes that Ryanair is dropping at Valencia and Sterling’s now defunct network.