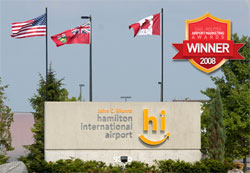 Hamilton International airport recently won the OAG Routes Airport Marketing Award for 2008 for The Americas region beating off some illustrious US opposition. Having achieved passenger traffic growth of 20% in 2006 and 25% in 2007 things would appear to be looking good for the airport which is located some 70 kilometres south-west of downtown Toronto. In May 2007 Flyglobespan began direct services from 11 UK airports which helped generate over 130,000 new passengers during 2007 on UK routes alone.

WestJet launched services to Hamilton in March 2000 and rapidly developed a significant presence at the airport. In 2002 it started some parallel services at Toronto Pearson airport before a major expansion there in 2004 resulted in Hamilton flights being reduced by more than 50%. This summer WestJet served five destinations non-stop from Hamilton (Calgary, Edmonton, Halifax, Moncton and Winnipeg) while last winter it also operated international flights to Fort Lauderdale, Orlando and Tampa in Florida. 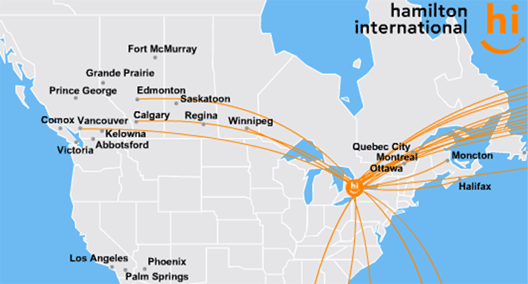 This year has been much tougher for the airport as Flyglobespan has cut many of its UK routes and reduced capacity on others resulting in only around 35,000 passengers on UK routes in 2008. However, new weekly routes were added to Bristol and Dublin.

Air Canada Jazz which had been operating multiple daily flights to Montreal and Ottawa axed both routes at the end of July leaving WestJet as the only scheduled airline operating domestic services. This helps explain the change in the airline’s seasonality profile this year.

This winter there are new weekly services to Varadero in Cuba and Punta Cana in the Dominican Republic, operated by Sunwing while Transat Holidays is also offering weekly flights to Punta Cana as well as the chance to soak up some winter sun in Cancun, Mexico.