The recent revelation that Indian low-cost airline GoAir had been courted by British Airways will have provoked a wry smile in seasoned industry observers who will recall that eight years ago British Airways chose to sell its own UK-based low-cost subsidiary with a similar name. Launched just over three years ago by the Wadia Group, GoAir has grown less dramatically than some of the other newer airlines in India, and having achieved a 5% share of the domestic market within 15 months the airline has since settled down to achieving between 4% and 4.5% of the previously booming Indian market. 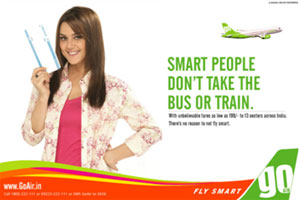 According to ICAO in 2006 the airline carried 910,000 passengers at a load factor of 62% which almost doubled to 1.79 million in 2007 at a load factor of almost 79%. With domestic air traffic demand in India falling by over 15% in recent months the airline’s winter schedule consists of just 10 non-stop routes, with nearly half of all capacity allocated to a single route. This is between Delhi and Mumbai where competition is intense. While GoAir has eight daily flights resulting in 55 weekly services, Kingfisher has 90, Jet Airways has 83, Indian Airlines has 70, Spicejet has 35 and IndiGo and JetLite both have 28. (Source: OAG Max Online for w/c 3 November 2008).

GoAir’s current fleet consists of seven 180-seat A320s, of which three are currently leased. The remaining four are part of an order for 20 aircraft the airline announced in February 2006. By next June a further four aircraft will be delivered replacing the leased aircraft and increasing the fleet to eight aircraft. With deliveries averaging four per year the airline will have 20 aircraft by March 2012.

The airline, managed by CEO Edgardo Badiali, the former boss of Italian LCC MyAir, recently introduced Go Comfort class aimed at business travellers on the Delhi-Mumbai route. Seat pitch will increase to 34 inches with only aisle or window seats available for purchase.