The “Middle East Big 3” (MEB3) airlines of Emirates, Etihad and Qatar Airways continue to add capacity to their networks though the number of new routes being started is relatively small. This week though Etihad began new routes to both Almaty and Moscow Domodedovo and Emirates will shortly be starting non-stop (16 hour) services to San Francisco.

Emirates has most ‘monopoly’ routes

Each of the MEB3 airlines offers flights to destinations not served by either of its rivals. Etihad’s recent launch of flights to Almaty in Kazakhstan is only its fourth ‘monopoly’ route joining Brussels, Dublin and Minsk.

Emirates operates a total of 21 ‘monopoly’ routes while Qatar Airways manages to find 11 destinations not served by either Emirates or Etihad. It appears that Etihad has dropped its route to Colombo in Sri Lanka, leaving it as a ‘duopoly’ between Emirates and Qatar Airways. Emirates will lose its ‘monopoly’ on Houston when Qatar Airways starts serving it from Doha next April.

Combining weekly frequencies across all MEB3 airlines reveals that Bahrain with 93 weekly departures beats London Heathrow (84) for most services. Kuwait, Dubai and Muscat each have 50 or more weekly departures. 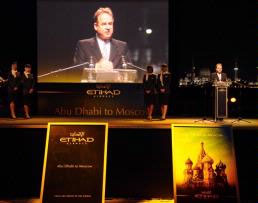 A total of 103 destinations are served non-stop by these three carriers, while several other destinations (notably in New Zealand) are served via intermediate points. Brisbane is served by both Emirates and Etihad via Sydney. Between January and December 2008 the number of weekly departures from their bases has increased by 14.2%% for Emirates at Dubai, 13.7% for Qatar Airways at Doha and 17.3% for Etihad at Abu Dhabi.