TUIfly rejects possible mergers with germanwings and airberlin; capacity cut by 30% this winter 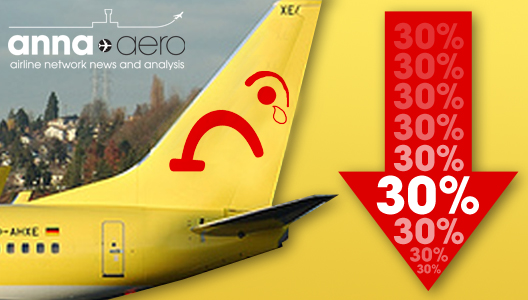 TUIfly.com began operations at the start of the 2007 summer season, having been created from the merger of TUI’s German low-cost carrier Hapag-Lloyd Express (a.k.a. hlx) and TUI’s German charter airline Hapagfly. Hlx had been formed in 2002 as a response to easyJet’s potential entry into the German low-cost market when it was evaluating the possibility of acquiring British Airways owned dba. With bases in Cologne/Bonn (from December 2002), Hannover (March 2003) and Stuttgart (September 2003), the airline grew rapidly to operate 18 aircraft by summer 2006. With a curious New York taxi inspired colour scheme the airline focused on Italian and Spanish destinations as well as some domestic routes.

With the merger between the two airlines now complete the combined airline has a fleet of over 40 737s, mostly -800s. Last winter around 15% of flights were operated on German domestic routes meaning that over 50% of all flights departed from a German airport. Spain and Italy are still the leading year-round country markets followed by Austria and Turkey, though in summer there are significant routes to various Greek island destinations.

Capacity is down across almost all country markets this winter with the notable exception of Egypt, where capacity is up 30%. Portugal and the UK are down less than 20% compared with last winter but flights to Turkey are down 45% while weekly frequencies to Greece have fallen from 43 to just six. However, German domestic capacity has remained unchanged. As a result domestic routes now represent around 20% of TUIfly’s winter network.

At the height of the summer season in August TUIfly’s busiest airports were Cologne/Bonn, Stuttgart, Palma and Hannover (where the airline has its HQ). Network capacity is down around 30% this winter with nearly all of the airline’s biggest bases affected. 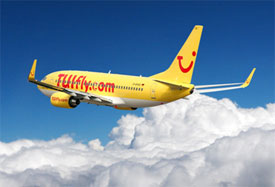 Flights to and from Antalya and Palma are down over 50%, but Berlin Tegel flights are down less than 5%. The airline’s newest base in Germany at Memmingen has remained unchanged with 39 weekly departures though frequencies on routes to Naples and Rome have been reduced to enable two new destinations to Antalya and Brindisi to be added. Each of these will be served weekly. More new routes from Memmingen to Catania, Palermo, Tel Aviv and Thessaloniki are due to start in the coming months.

This winter the airline has converted one aircraft to a VIP configuration with just 52 seats and is offering an 18-day luxury tour of South America and Cuba for just €33,860 per person. Stops include Brasilia, Buenos Aires, Cuzco, Havana, Lima and Mendoza.

Having at various times been involved in merger talks with Condor, Germanwings and most recently airberlin it is unclear what the future holds for TUIfly.com. As part of the giant TUI Travel group it could continue as a stand-alone carrier but the German airline market seems keen on consolidation at present.