Along with fellow former Soviet republics Estonia and Latvia, Lithuania became a member of the EU in May 2004. This helped stimulate air travel demand to and from the country which has a population of around 3.4 million and is roughly the size of Ireland. Its capital Vilnius is served by Vilnius International Airport (VNO) which handled just over 1.7 million passengers in 2007, an increase of 18% on the previous year. The national airline flyLAL Lithuanian Airlines is in an intense battle with airBaltic for market dominance with both carriers transporting around one-third of all passengers at the airport. 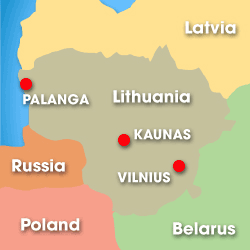 While flyLAL is now a privately-owned Lithuanian carrier, airBaltic is based in neighbouring Latvia and is part-owned by SAS. With five flights per day from Vilnius to its base in Riga the airline is trying to feed Lithuanian traffic through its ‘hub’, which, with over three million passengers in 2007, is considerably larger than Vilnius. However, flyLAL is fighting back and has seen its traffic grow by 63% in the first ten months of 2008 having grown its fleet to 16 aircraft (two 757s, 10 737s and four Saab 2000s) and adding Budapest, London Stansted, Madrid and Stockholm Arlanda as new destinations during the year. It expects to carry around 750,000 passengers this year.

As a result traffic at Vilnius has grown by over 25% in the first nine months of 2008 although growth in October fell to just 4% and traffic was down 12% in November as a result of capacity rationalisation by airBaltic and flyLAL. Despite this the airport is still on track to exceed two million passengers for the first time in 2008.

Ryanair is the only scheduled carrier at Kaunas

Lithuania has two other airports with scheduled services at present. Kaunas, which is less than 100 kilometres from Vilnius, handled 391,000 passengers in 2007 up almost 60% on the previous year. Ryanair started serving the airport from London Stansted in September 2005 and added Dublin the following April. It now serves both routes daily. This winter there are also low frequency routes to Birmingham, Frankfurt Hahn and London Luton. In the past the airline has also tried routes to Glasgow Prestwick, Liverpool, Shannon and Stockholm Skavsta. However, none of these are currently served, although Liverpool services return next summer.

The other airport with scheduled services is Palanga/Klapeida which this winter has routes to Copenhagen (twice daily with SAS) and Oslo Rygge (twice-weekly with Norwegian). Last year Palanga handled around 93,000 passengers.