While there are currently no international flights out of Australia’s Capital, domestic growth at Canberra airport has been on the rise in the last year – despite Canberra being the smaller relation compared with either Melbourne or Sydney. In fact, it was because neither Melbourne nor Sydney could tolerate the idea of the other being the capital that it was decided to create a new city, between the two, which would serve that purpose. The site that is now Canberra was selected in 1908 and the government moved there in 1927.

Ranked only 8th among Australian airports

With just under three million passengers in the last 12 months Canberra airport ranks as only the 8th busiest in the country.

Traffic growth during the last 12 months has averaged 7.6%. Only eight domestic destinations are served from the airport by four airlines. Weekly departures on each route for each airline are summarised below. 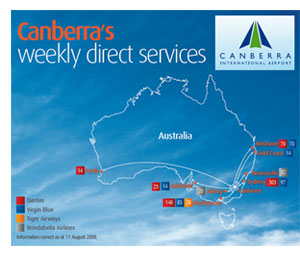 There are currently no international scheduled services though there are frequent foreign charters bringing politicians for meetings.

Tiger Airways began flights from its Melbourne base to Canberra on 14 February 2008, initially with daily flights. However, from 11 August a second daily flight was added which has helped boost passenger numbers on the route during September and October by some 15%-20%. So far the airline has not revealed plans to link Canberra to its second Australian base in Adelaide which opens in March.

Last February Virgin Blue began operating eight daily flights to Sydney using its new Embraer E190s. This broke the monopoly that Qantas had previously enjoyed on the route. While growth on the route was just 3.6% in 2007, so far in 2008 traffic has grown by 14.1%. In September and October traffic was up 20% compared to the previous year. Virgin now has around 25% of the market in terms of frequency.
Virgin Blue also started a new destination from Canberra last year when it began daily services to the Gold Coast on 4 March. This route is also served by the Embraer jets.