The re-launch of Alitalia as a fully-privatised company finally happened this week. The ‘new’ entity consists of a downsized ‘old’ Alitalia combined with Air One and Volareweb. The Volareweb website already re-directs straight to Alitalia’s homepage.

The airline has revealed that a new joint network will serve a total of 70 destinations, of which 23 are within Italy. However, nowhere on either airline’s website is there a simple overview timetable revealing the new schedule or destinations retained.

According to OAG for next month Alitalia (including Air One, Alitalia Express and Volareweb) are flying to 72 destinations. Clearly some information regarding the new schedule has not yet been passed on. A comparison with OAG data for February 2008 reveals that Alitalia (including Alitalia Express and Volareweb but not Air One) was flying to 101 destinations. The number of domestic airports served has remained unchanged at 23 but the number of international destinations has fallen from 79 to 49 (or 47). Airports that are no longer welcoming Alitalia can be segregated by region. 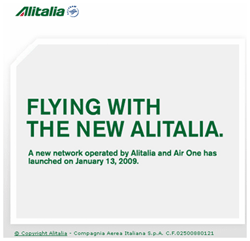 Five major western EU capital cities are no longer served – Berlin, Copenhagen, Helsinki, Lisbon and Vienna, and Switzerland’s biggest city of Zurich has also been struck off the list of destinations Alitalia now serves. For a so-called national flag-carrier to not be serving so many capital cities is quite extraordinary (but there again this is not an ordinary story).

Based on schedule data for February Alitalia is offering almost three times as many flights from Rome Fiumicino as from any other airport. Milan Linate and Milan Malpensa are the next busiest airports with Paris CDG (ranked 8th) the only non-Italian airport in the top 12.

The latest available figures (for November) reveal that demand in the Italian domestic market had fallen an alarming 16% in November. Alitalia appears to be focussing on retaining a considerable share of what remains for itself. According to current data held by OAG for flights planned in February Alitalia will have a 52% share of scheduled capacity in the domestic market.

Meridiana is now the second largest airline in the domestic market with less than half as many routes and less than a quarter of the capacity of Alitalia. Europe’s biggest LCCs, Ryanair and easyJet are now the fourth and fifth biggest domestic airlines in Italy.