In 2007 Cambodia’s two international airports at Phnom Penh (PNH) and Siem Reap (REP) handled 3.3 million passengers, representing growth of almost 25% on the previous year. Since 2003 combined traffic at the two airports has grown by 135% with passenger numbers at Siem Reap overtaking Phnom Penh for the first time in 2006. Siem Reap is the airport closest to Angkor Wat the iconic temple complex and World Heritage site built in the 12th century and a major tourist attraction.

The seasonality profile of Cambodia’s airports reflects the local tropical monsoon climate. The rainy season runs from May to November and the dry season from December to April. As a result tourists are much more likely to visit the country in ‘winter’ when the weather is more accommodating.

Traffic figures released for 2008 reveal that traffic at Phnom Penh is continuing to grow by around 10%; passenger numbers at Siem Reap look likely to fall slightly in 2008.

Based on current schedule data the leading destinations with links to/from Cambodia are Bangkok and Ho Chi Minh City. In 2007 Bangkok was the number one destination from Phnom Penh and ranked second at Siem Reap. Ho Chi Minh City was the leading route from Siem Reap and ranked fifth at Phnom Penh. The top five routes as measured by annual passenger numbers at each airport are summarised below.

The leading nationalities at Phnom Penh in 2007 were Chinese, American, Korean, Malaysian and Taiwanese. At Siem Reap the leading nationalities were Korean, Japanese, Taiwanese, American and French.
Scheduled flights are currently limited to regional Asian services but in December 2007 Air Finland began operating charter flights from Stockholm for the more adventurous tourist.

Just two airlines account for over 40% of all scheduled capacity at Cambodia’s two main airports. Bangkok Airways lead the way with flights from both airports to Bangkok as well as operating five daily domestic flights between Cambodia’s two airports. Vietnam Airlines operates five routes including two to Ventiane and Luang Prabang in the Lao People’s Democratic Republic.

Third airport being developed at Sihanoukville 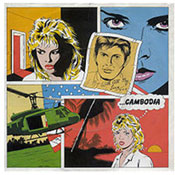 Back in 1981 English pop singer Kim Wilde had a somewhat unlikely European hit with a song called “Cambodia”. It reached #1 in Denmark, France, Sweden and Switzerland and was a Top 20 hit in nine other countries including South Africa.