Situated on the River Oder in the Lower Silesian region of south-west Poland Wroclaw has only been a Polish city since the Potsdam agreement of 1945. Before the second world war it was known as Breslau and was part of Germany. Prior to Poland joining the EU in May 2004 Wroclaw airport handled less than 300,000 passengers per annum. Last year the airport’s traffic reached almost 1.5 million passengers, an impressive five-fold increase in just five years. Although traffic across Poland’s six biggest airports grew by 7.1% in 2008, Wroclaw reported growth of 16.1%.

Traffic growth has continued even during the last few months of 2008 when many other airports across Europe were experiencing a fall in passenger demand. 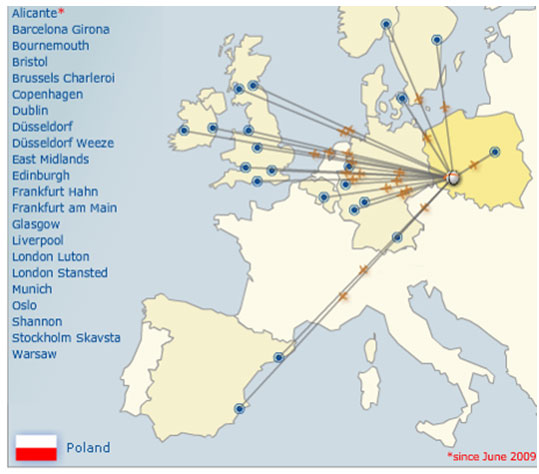 Since the start of the winter 2007/08 season new routes to/from Wroclaw have been added by Lufthansa (to Dűsseldorf and Frankfurt), Norwegian (to Olso), Ryanair (to Barcelona Girona, Bournemouth, Bristol, Brussels Charleroi, Dűsseldorf Weeze, Edinburgh and Stockholm Skavsta), Volareweb (to Milan Malpensa) and Wizz Air (to Doncaster/Sheffield and London Luton).

Some of these such as the Volareweb route and the Doncaster/Sheffield route are no longer operated. In addition the ending of scheduled services by LOT’s in-house LCC Centralwings has seen routes to Dublin, London Gatwick, Rome Ciampino and several Greek island destinations disappear from the schedules. However, Dublin and London are served by other airlines though Rome currently remains unserved.

LOT operates just three routes at the airport which account for almost 43% of weekly departures. These comprise 50 weekly departures to Warsaw, double-daily flights to Munich and daily flights to Frankfurt. LOT mostly uses its subsidiary EuroLOT to operate these flights using ATRs but LOT’s new Embraer E170 jets are also used on some frequencies. LOT’s share of seat capacity at the airport is a mere 24% as the majority of other flights are provided by LCCs using at least 150-seat aircraft. Ryanair’s 14 routes (only Dublin and London Stansted are served at least daily this winter) account for under 30% of flights, but over 50% of seats.
Lufthansa’s three routes to Dűsseldorf, Frankfurt and Munich give it a 19% share of flights (and 13% of capacity), while the only other scheduled routes operated are courtesy of Wizz Air (to Dortmund and London Luton), Norwegian (to Oslo) and Cimber Air (to Copenhagen).

Routes to Germany and the UK each account for just under 30% of scheduled seat capacity this winter. Polish domestic routes account for a further 17% and Irish routes another 12%. The remaining 12% of seats are split between routes to Belgium, Denmark, Norway, Spain and Sweden. There are currently no scheduled routes to Italy.