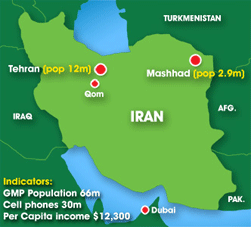 While Western authorities may be frustrated by the lack of reliable information available on certain topics from this enigmatic country, at least the country’s airlines are happy to make available schedule data for global consumption. As a result, according to OAG, Iran currently has 43 commercial airports offering scheduled services. Covering an area of over 1.6 million square kilometres (about three times the size of Spain) and with an estimated population of around 70 million (slightly more than France), air travel is an important part of domestic transportation.

Tehran has two major airports. Mehrabad Airport (THR) was for many years the only major airport and still handles the majority of domestic flights coming in and out of Tehran. It also handles a few international flights, primarily to Saudi Arabia for religious pilgrimages. In 2007 the airport handled around 11.8 million passengers.

Imam Khomeini International Airport (IKA) was planned some years ago but it was not finally completed until 2004. Since then things have not run entirely smoothly and it was not until the end of 2007 that the plan to move the majority of international flights to the new airport was completed.

Mashad is Iran’s second biggest city with a population of around 2.7 million people. Its airport, which handled around four million passengers in 2007, has regional international services to Bahrain (with Gulf Air), Dammam, Doha (with Qatar Airways), Dubai, Kabul and Kuwait (including with Jazeera Airways).

No US flights but several European hubs served

The UAE (including Abu Dhabi, Dubai and Sharjah) is by far the leading international country market to and from Iran. Dubai alone is connected to 13 different airports in Iran by a variety of carriers including Caspian Airlines, Iran Air, Iran Aseman Airlines, Kish Air, Mahan Air and, of course, Emirates.

Turkey, which was involved in the building of the new international airport through airport operator TAV, is the second biggest country market. Turkish Airlines serves Tehran from both Ankara and Istanbul, and also serves Tabriz from Istanbul. Several European airlines offer flights to Tehran from their major hubs including Austrian (from Vienna), Lufthansa (from Frankfurt), the new Alitalia (from Rome FCO) and KLM (from Amsterdam). Flights to London Heathrow are shared between bmi and Iran Air, while Paris is served only by Iran Air. This seems a trifle ironic given that it was Air France who returned Ayatollah Khomeini back to Iran from his exile in France back in 1979.
Other major foreign airlines with a presence in Tehran include Aeroflot, China Southern and Etihad. Even the region’s leading low-cost carrier has a presence as Air Arabia operates thrice-weekly from Sharjah to Tehran (THR) airport.

Due to various US sanctions Iranian airlines have been banned from buying new US or Airbus aircraft meaning that Iran Air’s fleet has an average age of around 20 years. According to the airline’s website the fleet consists of 10 A300s, two A310s, four 727s, seven 747s and 16 Fokker 100s, making a fleet of 39 aircraft in total. An order for over 30 Tupolev TU-204s has apparently been placed.